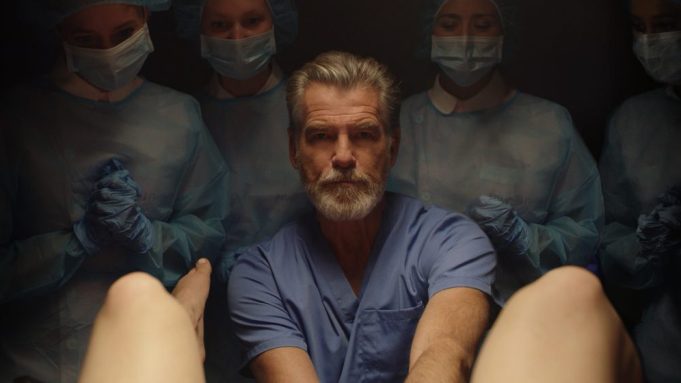 The horror-tinged fertility thriller False Positive really ‘delivers,’ in more ways than one.

Ilana Glazer and Justin Theroux star in the film premiering tonight at the Tribeca Festival, playing a couple struggling to have a baby. Seeking an expert’s assistance, they go to a world-renowned reproductive specialist, Dr. Hindle (Pierce Brosnan), who may or may not be on the up and up.

With Dr. Hindle’s help, Lucy (Glazer’s character) becomes pregnant with triplets through an in-vitro fertilization process. But in this eerie tale, directed by John Lee, nothing is necessarily as it seems. Lucy begins to get the feeling she’s being gaslighted, perhaps by her husband, Dr. Hindle, and Dr. Hindle’s chillingly cheerful nurse (Gretchen Mol).

“A lot of horror movies, they use the idea of gaslighting but they explain it. They tell you what’s happening, or in a jump scare they explain it afterwards,” Lee said during an appearance in Deadline’s virtual Tribeca Studio. “I kind of wanted to make sure you understood what it felt like to be gaslit. I’ve only had that experience a couple times in my life, and very small, but I’m going to guess most women have had a lot in their lives. So I wanted to really embrace that and you can really do that in cinema because you don’t always have to tell the truth. You don’t always have to explain things.”

Lee came up with the idea for the film based on his own experience, and his reading of a J.M. Barrie classic.

“My wife and I had some birth issues, and during that time I was reading Peter Pan,” he said. “There’s a section in Peter Pan where the parents, they’re inside the kids’ bedrooms… but they’re looking out the window that the kids have left [through] and I realized what a creepy kind of situation that was because it only meant a couple of things and none of them were good. It meant that either the kids have been thrown out the window or someone abducted them. And, to me, that was my understanding of what Peter Pan was, while also kind of wrestling with the idea of ghosts and memory and how do you kind of get over tragedy… The ending of the movie was basically birthed right then.”

There is a feminist layer to the film, the sense that male doctors have largely taken over the fertility field.

“The movie is very much about male obsession with female bodies,” Lee noted, “and male control of female bodies.”

The film includes scenes of Lucy at work, where male colleagues demean and dismiss her, whether intentionally or not. Lucy’s career aspirations and her pregnancy, thus, are both constrained by male power.

“That is the film, that is the experience, microaggressions are the kind of experience that women go through. And so without that we don’t have anything [in terms of a film],” Lee said. “From the small kind of workplace issues to the larger fertility issues, through her husband, you need that full spectrum or you actually do a disservice to the whole problem.”

“I’m glad they came on board,” Lee said of Hulu. “They totally understood the kind of awkward tension of the movie and really embraced it in a way. I think it’s found the perfect home.”

Watch the full conversation by clicking on the video above. The Deadline Studio is sponsored by Verimatrix.