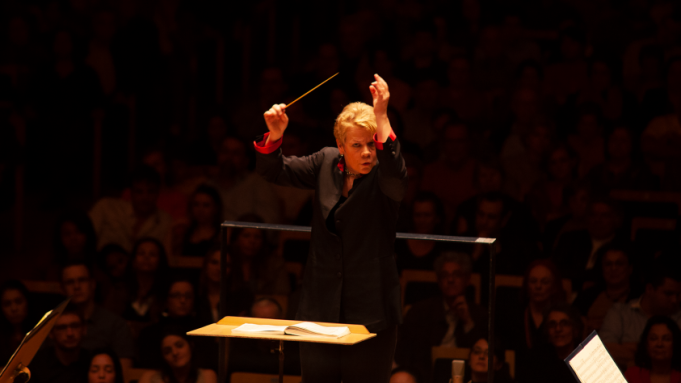 EXCLUSIVE: From a young age, Marin Alsop wanted to become an orchestra conductor. And from a young age she was always told no, simply because of her gender.

“I think I was 9 years old. I went to my violin teacher and I said, ‘You know, I saw this amazing conductor, and I’m going to be the conductor,” Alsop recalls in the documentary The Conductor, premiering at the Tribeca Film Festival. “She said, ‘Girls can’t do that.’”

Fortunately–for classical music and for women who aspire to hold the baton–Alsop persisted in pursuing her dream. The documentary, directed by Bernadette Wegenstein, tracks how Alsop defied the naysayers to become the first woman to lead major classical orchestras in the U.S., South America, Austria and Britain.

Watch the film’s trailer below.

“The Marin Alsop that unfolds before us is a person who makes no secret about the fact that she fought every moment of her life to achieve her place in the classical music world,” the filmmaking team observed. “The Conductor… ultimately becomes a metaphor for passion, leadership and the role that we all play in giving ‘outsiders’ a chance.”

Wegenstein, an Austrian native, faced the challenge of telling the story of a woman who is comfortable commanding musicians from the conductor’s podium, but not necessarily in speaking about herself.

“I wanted to find a cinematographic language that expressed the power of classical orchestral music while getting close to Marin Alsop, a character who by her nature chooses her words carefully, and is a self-proclaimed introvert,” Wegenstein explained in a director’s statement. “To make Marin feel comfortable, I kept juggling the settings we chose for her interviews to get her to react spontaneously to my questions. The result is a blend of crisp Cinema Vérité that brings out the liveliness of the music with intimate interviews that Marin gave us in her private office and backstage of the Meyerhoff Symphony Hall [in Baltimore, Maryland].”

The director continued, “Additionally, we developed a stylized macro-lens and slow-motion/phantom approach to highlight the ‘trance’ that Marin enters when being united with the orchestra through the music.”

The documentary, a production of Nylon Films and Waystone Film KG, also contains a dramatization of a formative moment in Alsop’s life, when as a girl she saw the great Leonard Bernstein conduct a Young People’s Concert in New York.

“[We]… come back to this question over and over in the film’s narrative. Why didn’t she give up? What kept her going back to the dream of her nine-year-old self?” Wegenstein noted. “The answer became clear to me making the film: her love of music and her steely resolve to see her dream of becoming a conductor through.”