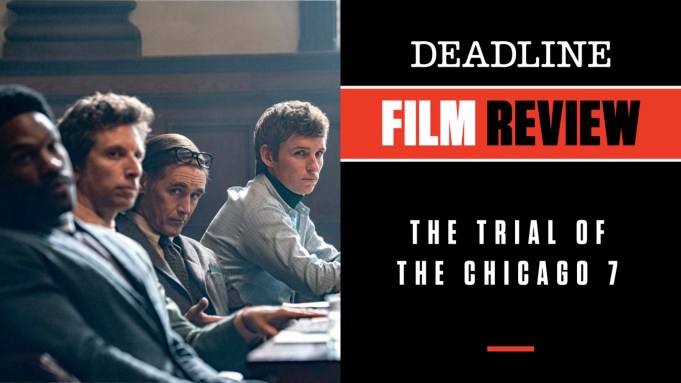 Protesters line the streets shouting about injustice, instigators cross state lines accused of inciting violence, National Guard and police take charge and clash with peaceful protesters, a Republican president touting law and order sends his attorney general to put what he calls radical elements of the left on trial. Sound like life in Trump’s America today?

All of this actually happened in the tumultuous late 1960s and has been dramatized by writer-director Aaron Sorkin in a prescient and pertinent new film, The Trial of the Chicago 7, documenting what became known as one of the most raucous, controversial and notorious trials ever. Those seven were activists of one stripe or another accused of crossing state lines in order to incite violence and riots outside of the 1968 Democratic Convention in Chicago at what was intended to be a peaceful protest. By the fall of ’69, Dr. Martin Luther King and Sen. Robert Kennedy had assassinated, the unpopular Vietnam War raged on, the country’s young people stood up, newly elected President Richard Nixon was clamping down on those he labeled left-wing agitators, and the chaos that erupted on the streets of Chicago the year before carried on into a courtroom like no other.

Sorkin has been working on getting this to the screen for 13 years. Initially engaged by Steven Spielberg — whose DreamWorks is a backer of the film — to write a movie about this crazy trial, the project took a lot of detours before Spielberg convinced him that the time was ripe just after Donald Trump was elected in 2016 and it appeared the country was in for another round of social unrest and upheaval. It finally all came together, and now, just 40 days before what many on both sides are calling the most important election of our lifetimes, Netflix is purposefully releasing a movie that in some ways uncannily mirrors the times we are living in at this moment. Timing is everything, and this film clearly hopes to shine a light on America then but, more important, America today, a warning shot designed to make a difference and open eyes.

What Sorkin serves up with the help of a superbly chosen ensemble isn’t just a dry courtroom drama that recites events from “a Wikipedia page,” as the director puts it, but one with urgent life and energy that is structured to dart back and forth between the harrowing events that created this trial, the ongoing trial itself and the conflict at the center between two of those “Chicago 7”: the more practical and calculating Tom Hayden (played by Eddie Redmayne) and the off-the-wall, anything-goes antics of Abbie Hoffman (Sacha Baron Cohen). Separating this from other courtroom dramas, that opposing dynamic by two of those on trial in support of the same cause but with wildly different tactics gives this telling of a historical event real gravitas and human interest. Both actors are superb, with Redmayne, in subtle fashion, playing the low-key but true believer Hayden, and Cohen, in his best film outing to date, going all in on Hoffman, the outrageous “Yippie” who, paired with partner Jerry Rubin (a terrific turn from newly minted Emmy winner Jeremy Strong), threaten to upend not only the trial but the whole cause Hayden is continuing to fight for.

‘The Trial Of The Chicago 7’ Trailer: The “Whole World Is Watching” In Netflix’s Political Drama From Aaron Sorkin

The disagreements between them shine a light on the current quandary Democrats find themselves in trying to support progressives and protest and still being able to win against an opponent touting law and order in the streets. To say this is a trial full of fireworks is an understatement, but Sorkin is smart enough to not let the sheer craziness of it all overwhelm the powerful message it still can teach us, as well as his ability to put a mirror up to a country that was fighting to save democracy then and is even more urgently in need of that fight now. Sometimes movies can take on an outsized importance, and this just might be one of those times — more powerful and sobering reminder of what is at stake we are not likely to see this year.

Among the rest of the large and impressive cast, there is fine work from others in the “7,” notably John Carroll Lynch as David Dellinger; Alex Sharp as Rennie Davis; and another new Emmy winner, Yahya Abdul-Mateen II’s heartbreakingly powerful Bobby Seale, a Black Panther perhaps the most egregiously attacked here, especially by the take-no-prisoners Judge Julius Hoffman, played with unerring evil intensity by Frank Langella. This is the same actor who so brilliantly played Nixon himself in Frost/Nixon. If it didn’t all happen and this judge wasn’t truly the nightmare he is shown to be here, you would say Langella is a bit over the top, but he captures the cold heart of this man with precision.

On the opposite side, Mark Rylance is equally impressive as William Kunstler, the world-weary defense lawyer on a personal mission. As the prosecutor installed by Nixon’s AG at the time, Joseph Gordon-Levitt again is all-pro as Richard Schultz. Appearing briefly but effectively is Michael Keaton as former Attorney General Ramsey Clark, getting a choice line that likely will elicit laughs in light of the practices of our current AG William Barr when he reminds the court that “the president is not a client of the Attorney General of the United States.”

Special shout-outs to Phedon Papamichael’s expert camera work and Daniel Pemberton’s stirring score and end-credit song sung by Celeste. Producers are Marc Platt, Stuart Besser, Matt Jackson and Tyler Thompson. Demonstrating the complicated path to the screen, Netflix presents in association with Paramount Picture and Cross Creek Pictures A Marc Platt/DreamWorks production in association with Shivhans Pictures. Word is the filmmakers were determined to see this released ahead of the November 3 election, thus the handoff to Netflix, which opens it Friday in select theatres, followed by a streaming debut on October 16. Check out my video review with scenes from the film at the link above.

Do you plan to see The Trial of the Chicago 7? Let us know what you think.