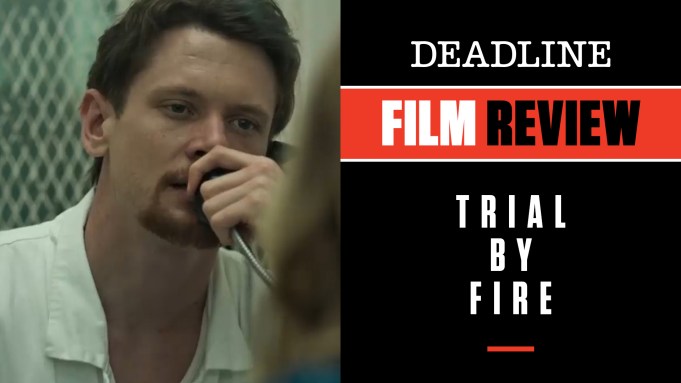 Trial By Fire had its world premiere at the Telluride Film Festival in September and now finally will see the light of day in a theatrical run. I saw it then, and I have recently seen it again. It is powerful stuff that packs a real emotional punch. At its core it is a movie that makes you angry and presents a sad commentary on justice not only in Texas but in America, telling the true story of Cameron Todd Willingham, a poor, prone-to-violence Texas man who was convicted in 1992 of killing his three young children in an arson fire. Willingham spent 12 years on death row before being executed in a state that seemed more intent on pulling the lever than digging into the facts that indicated his innocence.

The first half of the film covers the trial and events leading up to it as Willingham, expertly played by Jack O’Connell, is not presented as any kind of saint that you might see in a lot of Hollywood movies dealing with subjects like this. But as the film — directed by Ed Zwick (Glory, The Last Samurai) and written by Geoffrey Fletcher (Oscar winner for Precious) from a New Yorker article by David Grann — points out, no matter the flaws of the man there were real questions about his guilt as mounting evidence to the contrary was summarily ignored and justice in this case was not rendered.

The heart of the film comes near the halfway point, when Elizabeth Gilbert comes on the scene. She was a playwright who became interested in Willingham’s case after researching it and decided to get involved. Laura Dern plays her beautifully, and it is the bond that emerges between Gilbert and Willingham, even separated between the glass prison partition in their scenes together, that gives this engrossing film much of its humanity and character development.  Although Willingham has been beaten down by an unjust system, Gilbert seeks to bring him back up and doggedly pursues convincing proof that scientific evidence and the participation of arson experts were suppressed in favor of shaky witness accounts.

The real villains here are the state officials who ignored the emerging truth, from then-Gov. Rick Perry (now a Trump administration cabinet secretary) on down. It is frustrating and heartbreaking to watch, but even after Willingham’s execution, organizations including the Innocence Project are involved in trying to bring him justice posthumously. A movie like this can make an impact, and that is why it is important to seek it out.

Zwick skillfully explores the subject matter without ever getting preachy, and always through the film’s complex structure allowing the audience to make up its own mind on what the real truth is.  British-born O’Connell is simply superb here in a three-dimensional portrayal of a man who was served a raw deal, didn’t always handle it well, but proved to be a victim of a system that simply didn’t care about anything but its own political agenda. Dern, as always, gets right to heart of a woman who did care and wouldn’t give up, even when life also dealt her a shockingly unfair blow in the midst of it all. Emily Meade as Willingham’s wife brings fire to someone caught up in a highly volatile marriage with a husband convicted of killing her children. Their relationship is complicated to say the least, but Meade and O’Connell give it depth. McKinley Belcher III, Chris Coy and Blake Lewis also stand out in well-defined supporting roles.

Zwick, Allyn Stewart, Alex Soros and Kipp Nelson produced the film, which Roadside Attractions releases Friday. Check out my video review above that included scenes from the film.

Do you plan to see Trial By Fire? Let us know what you think.