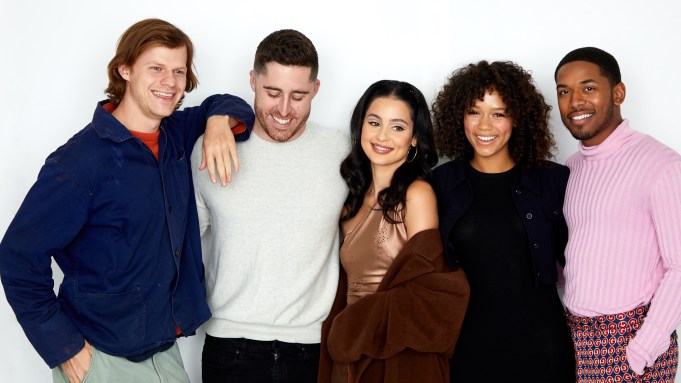 It took writer/director Trey Edward Shults many years to settle on the story of Waves—a tale of family tension, poor decisions and tragic connection— but when it came, it was personally resonant and structurally bold.

“This one has been brewing forever, maybe a decade or so, and it’s been shifting in different iterations,” he said at Deadline’s TIFF studio. “But it was hard to write. I could never really write it, or figure out how…It’s like I knew the broad strokes, but I couldn’t connect it all. And then, for whatever reason—living life and different things—it finally clicked, and I could write it I think two summers ago, after my last movie. It was putting extremely personal stuff in it, almost like autobiography, that then spins in a narrative, and then comes back to autobiography.”

Kelvin Harrison Jr. had been in Shults’ It Comes at Night (2017) and the director immediately knew he should be in Waves‘ lead role of Tyler, a high school wrestling athlete under intense pressure from his father (Sterling K. Brown).

“I wanted to work with him again, and we love each other,” Shults said, “and we sort of collaborated on his character in particular, Tyler, and this specific nuance.”

For Harrison, the dichotomy in Tyler’s life was fascinating. He’s both fortunate and ill-fated. “I wanted to be challenged,” he said, “and it’s a tricky balance with Tyler, because there’s like this procession of his life that’s so grand, and so much fun, and his relationship with his girlfriend is so dynamic, and so full of love and spontaneity. I was like, ‘I’ve never experienced that. He’s so cool.’ But he’s dealing with a lot of expectation and a lot of boxes that his dad’s kind of put him in, in terms of being a young black male, and being exceptional, and doing his best. I was like, ‘That duality is fascinating to me,’ and I kind of wanted to explore it and still find his humanity in all of it.”

The second half of the film switches gears, with Tyler’s sister Emily, played by Taylor Russell, stepping into the shoes of protagonist. For Russell the role clicked right away. “Reading her,” she said, “I just felt connected to her automatically. I think you get that with certain characters that you read, that you just click right away, and you know that you have the same voice. I felt that with her, and I just was really in love with the story, and I thought it was really important and needed to be told.”

For Lucas Hedges, as Emily’s boyfriend, the chemistry between them came naturally. “I don’t know if it’s something we consciously did,” he said. “It’s like, that doesn’t really work. So, I think that it was just really sweet, and that’s sort of what was good with it, you know? That’s a testament to Trey and the environment that he created on set, and I think me and Taylor just really get along. It was really easy to have that chemistry.”