Continue to Deadline SKIP AD
You will be redirected back to your article in seconds
Skip to main content
March 24, 2020 8:15am
2Comments 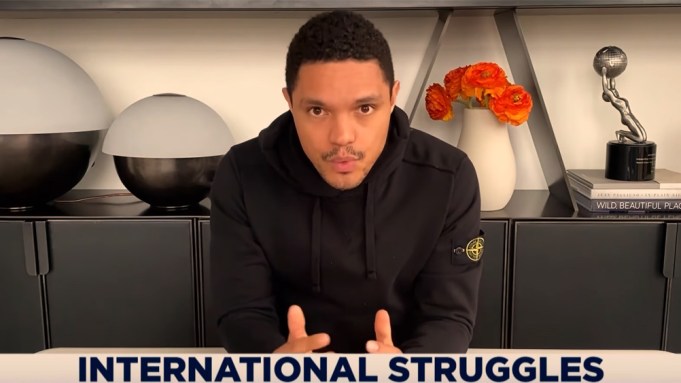 Trevor Noah updated viewers on the coronavirus situation on his The Daily Social Distancing Show Monday.

He joked that there is “some really good news” for anyone who’s stressing about running out of toilet paper. “There a new online toilet paper calculator that will help people figure out how long your supply will last so you can stop hoarding, because right now people have bought so much toilet paper they could probably pass it down in their will,’ he advised.

Noah also noted that the Tokyo Olympics have finally been postponed, but not everyone has gotten the cancel message. “Tom and Linda are going forward with their game night as planned,” he grumbled. “I thought I’d gotten out of it, but now they want me to do it over Skype — unbelievable. How do you even play game night over Skype? … Just cancel Tom and Linda, just cancel!”

He also slammed Senate Republicans’ $500 billion slush fund as part of a $2 trillion relief package that is locked up in Congress. “You realize, Trump would basically be able to choose which business he wants to survive and which businesses he wants to end up like his businesses,” Noah quipped. “Basically, any company that has publicly opposed Trump — or makes vegetables — could get screwed.”

You can watch his entire monologue above.

Meanwhile, Seth Meyers came to viewers with a new Closer Look segment from his hallway. “It may be weird to do it from a hallway, but at least I’m not doing it from a public beach!” Meyers joked, sarcastically referring to those who have ignored social distancing guidelines and flocked to beaches and other public places. “Let me be clear. I’m not saying people are dumb for going to the beach during a pandemic, which they are. I’m saying you’re dumb for going to the beach, period.”

Late Show host Stephen Colbert thought it might be a good time for viewers to revisit some childhood skills they’re having to rely on during the coronavirus crisis. In a digital segment titled “Trying to Remember Things That You Knew How to Do When You Were Younger and Now You Have Time for Because You’re Stuck at Home,” Colbert changed the inner tube on his bike.

And Tonight Show‘s Jimmy Fallon riffed on the latest coronavirus updates on his At Home Edition.