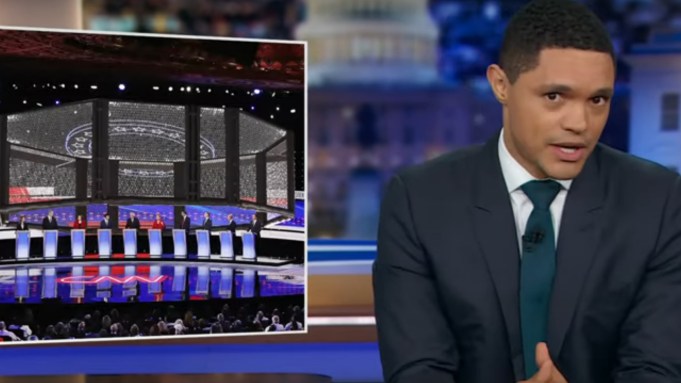 Trevor Noah took a humorous jab at CNN in his take on Tuesday night’s Democratic debate in his The Daily Show open.

“Instead of jumping straight into the debates, CNN started with a long fight-night promo, and then an endless stream of all the Democratic candidates shaking hands with each other which took forEVER because there are like 50 people on the stage, and secondly because Marianne Williamson insisted on giving everyone a palm reading,” Noah opined.

He also criticized the CNN moderators for cutting off the candidates when they went over time and then trying to pit them against each other.

“Half of those questions might as well have been, ‘Pick three people on this stage: eff, marry, kill, go, go. Like, I felt like at any moment they were about to go, ‘By the way, Elizabeth, did you notice that Klobuchar totally stole your look? Just saying.’”

“And I’m not saying CNN just wanted fights to gin up the ratings, I’m just saying it was a little suspicious when they even lowered that cage over the stage,” he joked.

You can watch Noah’s entire open above.