Continue to Deadline SKIP AD
You will be redirected back to your article in seconds
Skip to main content
June 1, 2020 10:45am 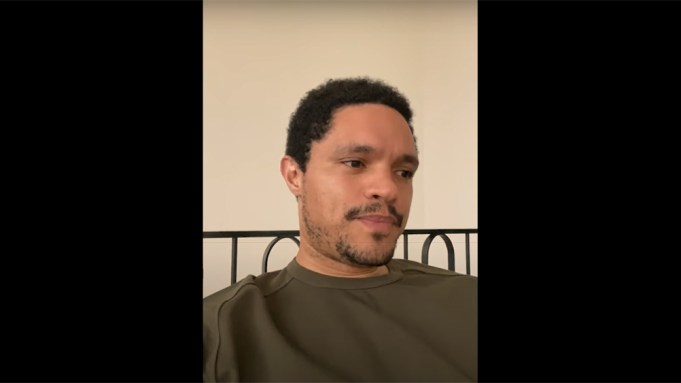 Trevor Noah delivered a powerful commentary on the death of George Floyd and the subsequent protests that have erupted throughout the country in the days since. In an 18-minute monologue posted during Friday’s at-home episode of The Daily Show, viewed more than 5.4 million times so far, Noah passionately addressed Floyd’s killing and the violent protests the followed, at one point arguing that “police in America are looting Black bodies.”

In the commentary, Noah asked “what vested interest” the demonstrators had in maintaining the idea that “society is a contract” when those in power were not upholding their end of the deal.

“Try to imagine how it must feel for Black Americans when they watch themselves being looted every single day,” said Noah. “Because that’s fundamentally what’s happening in America. Police in America are looting Black bodies. And I know someone might think that’s an extreme phrase, but it’s not.”

At the beginning of his commentary, Noah reflected on the horrific video in which Minneapolis police officer Derek Chauvin knelt on Floyd’s neck as he was pinned to the ground unarmed, crying out “I can’t breathe.”

“I don’t know what made that video more painful for people to watch,” Noah said, “the fact that that man was having his life taken in front of our eyes? The fact that we’re watching someone be murdered by someone whose job is to protect and serve? Or the fact that he seemed so calm doing it, you know?” Noah said. “Oftentimes, we were always told that police feared for their life. It was like a threat. You always feel like an asshole when you’re like, you didn’t fear for your life. Why did you fear for your life? How did you fear for your life? But now, more and more, we’re starting to see that it doesn’t seem like it’s a fear—it just seems like you can do it, so you did it. There was a black man on the ground in handcuffs, and you could take his life, so you did. Almost knowing that there would be no ramifications.”

Noah concluded by asking viewers to put themselves in the position of people who have protested in the last week. “They were destroying the contract that you thought they had signed with your society,” he said. “Now, think to yourself—imagine if you were them, watching that contract be ripped up every single day. Ask yourself how you’d feel.”

Chauvin and three other officers were fired and Chauvin has been charged with 3rd degree murder and manslaughter in Floyd’s death. Funeral services for Floyd are scheduled for Thursday, according to CNN.

You can watch Noah’s entire commentary above.