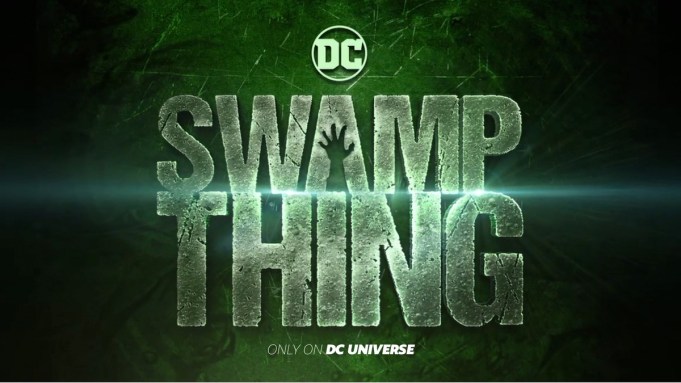 The series premiere of Swamp Thing arrives this Friday on the DC Universe subscription streaming site and the just-released full trailer makes it clear that the series will be immersed in horror and rooted in the supernatural in a way that sets it apart from the standard DC superhero fare on TV.

The show departs from the traditional DC Comics mythology with its bio-hazard horror emphasis and the reframing of Abby Arcane (portrayed by Crystal Reed of Teen Wolf) as a CDC investigator chasing a hot-zone mystery that brings her back to her eerie Louisiana hometown where she must confront a mystifying medical threat and her own dark and painful past. The series mythology takes place in its own separate world and apart from other DC Universe originals, such as Titans and Doom Patrol.

The synopsis: “Swamp Thing follows Abby Arcane as she investigates what seems to be a deadly swamp-born virus in a small town in Louisiana but soon discovers that the swamp holds mystical and terrifying secrets. When unexplainable and chilling horrors emerge from the murky marsh, no one is safe.”

Surprisingly, the mysterious muck-covered monster known as Swamp Thing has one of the most extensive screen histories of any DC Comics character. More than that, for decades the doleful bog creature ranked only behind Superman and Batman among DC Comics characters with multiple big-screen adaptations. Consider: In the 30-year span between the release of Superman in 1978 and The Dark Knight in 2008, there were 21 theatrically released feature films based on characters from DC Comics and its imprints. But only three characters earned a sequel in that entire span: Batman ( with seven total films), Superman (five films), and Swamp Thing (two films).

The first film, Swamp Thing (1982), was written and directed by Wes Craven, but it was not nearly as memorable as his next rubber-masked project (A Nightmare on Elm Street in 1984). Jim Wynorski helmed the succinctly titled sequel, The Return of the Swamp Thing (1989). That was followed by an unlikely (and short-lived) Saturday morning animated television series in 1991 and a live-action USA Network series (1992-1993).

For fans, none of those previous screen adaptations came anywhere close to capturing the signature version of the character, which was far more complex and intriguing than his B-movie name might suggest. That defining version of the character was in the 1980s comics work by British writer Alan Moore, who also wrote Watchmen, the medium-defining 1980s masterwork that inspired the upcoming HBO series.

James Wan, Mark Verheiden, Gary Dauberman, Michael Clear, and Len Wiseman are executive producers of Swamp Thing, which is based on the DC Comics character created by writer Len Wein and the late, great artist Bernie Wrightson and introduced in 1971 in the pages of DC’s House of Mystery horror anthology. Rob Hackett is co-producer. The series is produced by Atomic Monster in association with Warner Bros. Television. Len Wiseman directs the series premiere working off a Verheiden & Dauberman script.