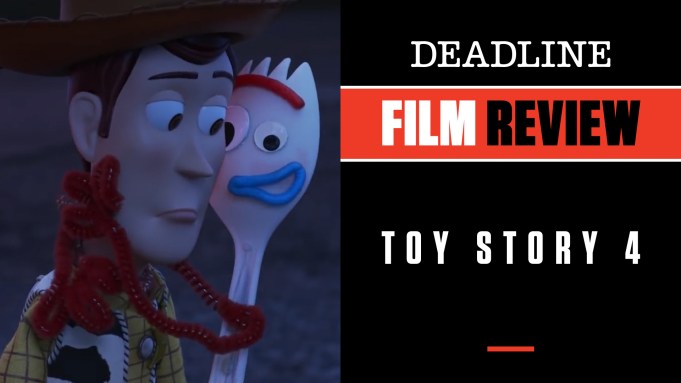 First off, who would have predicted that the G-rated Toy Story 4 would be the most swooningly romantic movie of 2019, but that is the way it seems. You will lose your heart over this exceptional third sequel to Pixar’s original 1995 classic, just as erstwhile and ever responsible Woody loses his over Bo Peep when the long-separated dolls find each other again. That is just one of the aspects of this joyful reunion of the gang of toys we came to love through all their travails in three previous films, and now in this one with a lot of newbies added to the mix that you won’t soon forget.

Of course anchoring it once again is the cowboy doll Woody (Tom Hanks), once belonging to Andy but now in the collection of young Bonnie (Madeleine McGraw), as is Buzz Lightyear (Tim Allen) and a recognizable assortment of others. The film opens with a flashback to a dark, rainy night nine years earlier; there’s a commotion among the toys and Bo Peep (Annie Potts) is taken away in a box, causing a poignant goodbye with Woody, who is outside trying to restore some semblance of order. Cut to nearly a decade later, Andy is off at college and Woody is basically relegated to the closet with some of the other toys Bonnie doesn’t seem as interested in much anymore. But stowing away in her backpack, Woody joins her on her first day of kindergarten and helps her in a little crafts experiment when he digs out a discarded spork and other items for her.

Thus Forky (voiced by Tony Hale) comes awkwardly into the world and the loving embrace of Bonnie, who instantly makes the pathetic-looking “toy” a favorite. One problem: Forky constantly keeps trying to return to the trash, where he thinks he belongs. Woody comes to the rescue every time in some hilarious shtick.

This all leads to the main event when Bonnie and family, her toy menagerie in tow, take off on a trip where Forky promptly leaps out of the van into the wilderness. Woody knows she will be heartbroken, so he goes after Forky and promises to meet up later with the gang. As the pair wanders around, they come upon an antique store where — guess what? — Woody sees the stand on which Bo Peep once stood. Entering into this dusty, crowded place he and Forky face off with the ever-unsold and devious-seeming doll Gabby Gabby (Christina Hendricks, going all out) and her truly creepy quartet of identical henchmen aka ventriloquist dummy dolls. Forky is taken hostage, and eventually Woody does reunite with Bo Peep and her sheep outside in a remote area where she and her new sidekick Giggles McDimples agree to team up with Woody to save Forky and get him back to Bonnie.

Meanwhile, Buzz winds up hanging on the wall as a prize in a carnival game, where he meets two others in the same situation — the riotous duo of Ducky and Bunny (Keegan-Michael Key and Jordan Peele) who are just dying to get selected but never do. Another new character also figures in the action, that being Duke Caboom, an Evel Knievel-style Canadian motorcycle daredevil voiced by none other than Keanu Reeves.

Bottom line: It is all as irresistible as ever, with the new additions to the cast adding immensely to the old favorites. The script is a hoot that also manages to be poignant, human and, yes, romantic in ways you might never expect. It has been nine years since Toy Story 3, and there was 11 years between installments before that, but the brain trust at Pixar not only haven’t lost their touch, they have topped themselves.

Josh Cooley makes a triumphant feature directorial debut, and the ever-sharp screenplay is from Pixar vet Andrew Stanton and Stephany Folsom. Producers are Mark Nielsen and Jonas Rivera. Disney releases it Friday. Check out my video review above with scenes from the film included. The film is rightfully dedicated to Mr. Potato Head himself, Don Rickles.

Do you plan to see Toy Story 4? Let us know what you think.