Continue to Deadline SKIP AD
You will be redirected back to your article in seconds
Skip to main content
October 7, 2020 9:26am 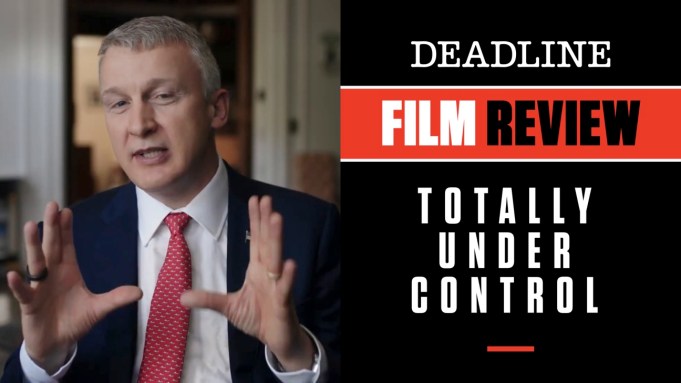 You have heard the phrase “totally under control” numerous times in the past several months. Now a chilling new documentary that was put into production in April, Totally Under Control, examines the irony of a disastrous U.S. government response to the greatest pandemic in a century that was anything but under control.

Oscar winner Alex Gibney shares directorial honors with Suzanne Hillinger and Ophelia Harutyunyan in urgently rushing this insightful and precise recounting of the monumental failure of Donald Trump’s administration to keep a lid on the coronavirus crisis as it slowly spun out of control despite all the spin they could muster to say they had it covered. The filmmakers, with the support of Neon and Participant Media backing their efforts, have done a remarkable job in distilling the facts of the matter by narrowing their focus to a comparison of two countries grappling with this once-in-a-century human nightmare. Thus the spotlight is turned on the U.S. and South Korea, which registered their first death attributed to COVID-19 on the same day: January 20, 2020. The trajectory of both, though not comparable in size, is eye-opening as South Korea now is back to a semblance of normal in a big way with fewer than 400 deaths out of a population of 51 million, while the U.S. has more than 210,000 deaths and a projection to possibly double that amount by the end of the year, with the light at the end of the tunnel nowhere in sight and a medical crisis that has been politicized in the throes of an election year.

The comprehensive docu switches between the two countries, primarily during the early months, as it weaves the tale in an almost prosecutorial manner. There are interviews with numerous health experts, doctors, journalists and whistleblowers who stood on the front lines of a disaster while the Trump official line was that it would all just miraculously disappear — downplaying the impact publicly while privately caught on tape recognizing this was no mere flu but rather a relentless and vicious killer. Although China, where the outbreak originated, is highlighted, as well as Europe and India, Gibney and company firmly lay the blame at the hands of America by labeling it a massive failure of incompetence and corruption in making what the director says is not really a politically docu, just one that wants to sort out the truth from the fake news American leadership is pushing out about it. It also becomes a chilling account of how politics took over science on a dead end road to nowhere.

As in any good docu, the filmmakers are blessed to have some really well-spoken and informed insider interview subjects to carry the day. Chief among them is Rick Bright, a biomedical advanced research executive for BARDA, who in detail puts out the whole picture of inaction that would lead to death on a greater scale than almost any other monumental American event. He gets highly emotional as he tells the day to day collapse of the Trump administration’s handing and denial of reality. Then there is Max Kennedy, grandson of the late Robert Kennedy, who joined Jared Kushner’s ill-advised and ultimately unsuccessful task force of a dozen or so 20ish supply-chain volunteers, who basically were hung out to dry by the powers that be as they desperately tried to find ways to get masks back in the hands of Americans after the administration had cleaned out the cupboards in the art of some really bad dealmaking with other countries. New York Times White House correspondent Michael Shear also adds immeasurably to putting all the pieces of the puzzle together as the story of Trump’s failed attempts to paint a different picture than the truth of what was really happening comes crashing down.

The film has been in production right up to the last minute, and in fact has an enormously effective end credit coda about President Trump’s own COVID-19 diagnosis, which came the day after they had locked the film. In its own simple way, it puts everything that had come in the previous two hours right into ironic perspective. Sadly, this expert and powerfully important film likely will spawn a sequel before all of this is finally over. Look at Totally Under Control as Act I.

This is must-see stuff, and that is exactly what the filmmakers intended, a film to be seen before you cast your vote. Appropriately, it opens in drive-ins this Friday, followed by an October 13 break on-demand and then October 20 on Hulu. Check out my video review with scenes from the film at the link above.

Do you plan to see Totally Under Control? Let us know what you think