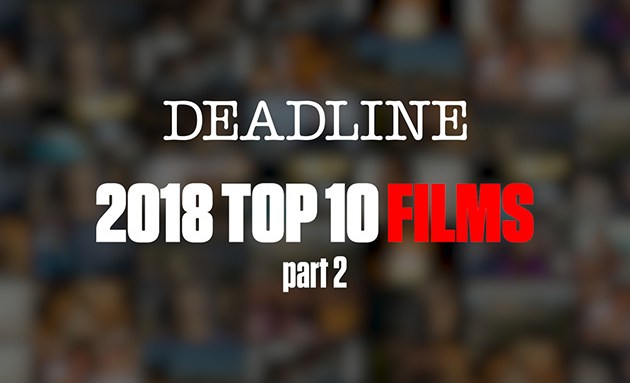 It is New Year’s Eve and time for one final look back at the films that moved me most in 2018. On Thursday my video recap revealed Part 1 of the year’s Top 10 films, and in case you didn’t watch, that list included No. 10, Morgan Neville’s transcendent documentary on Fred Rogers called Won’t You Be My Neighbor? No. 9 was Private Life, my favorite 2018 Netflix offering (first at Sundance), the Tamara Jenkins dramedy of a couple addicted to fertility treatments in their efforts to conceive that features pitch-perfect performances from Kathryn Hahn, Paul Giamatti and wonderful newcomer Kayli Carter. No. 8 was Vice, Adam McKay’s brilliantly scathing satire on Dick Cheney. No. 7 was the groundbreaking Crazy Rich Asians, which among other things brought the suffering romantic comedy genre roaring back to life. And No. 6 was Bradley Cooper’s stunning remake of a remake of a remake of A Star Is Born, which proved the fourth time indeed can be charmed.

Now it is time to reveal Part 2 with the top five films on my list. For those commenters who complained about having to watch the video (complete with clips and commentary) to find out what was on the list in Part 1, here is a little twist: I am going to list the top five films right here, but in no particular order. But to find out how they placed, including which film I name as number 1 of 2018, just click the video link above.

It’s never easy putting together one of these year-end lists since there are so many good films out there with many reasons to celebrate them. As I wrote on Thursday, I tend to try to be inclusive of all different kinds of filmmaking in compiling the 10 best, and for today’s purposes the five best. So that is why my rundown differs in some ways from the usual suspects you have been seeing on year-end critics lists since, like it or not, a lot of them run in packs. I just don’t think that the same 10 films that apparently appeal to cineastes tastes (or for that matter President Barack Obama’s if you saw his list and actually believe he compiled it himself) should be the last word.

There are so many great and very different kinds of films being made these days from major studios to indies to foreign to animation to documentaries that I want to celebrate them all in one way or another as I look back. And so my Top 5 continues that effort and includes a heartbreaking story of a child’s struggle to live in contemporary Beirut, a soaring Disney musical, an inspiring true human story that crosses racial divides in the South of 1962, another very different look at those divides from one of cinema’s most combustible and powerful voices and a compelling drama starring an actress and comic talent in a revelatory turn as we have never seen from her before.

The Top 5 — alphabetically for now — are Spike Lee’s pulsating, funny, harrowing and powerful BlacKkKlansman, a wow experience at Cannes that has only grown more urgent for me as the year has progressed (read my original review here); Can You Ever Forgive Me? starring Melissa McCarthy and Richard E. Grant, both remarkably good, in a true story of a talented writer at the end of her rope who finds a unique if illegal way to survive in the ever-changing and unforgiving New York City of the 1990s (review); Capernaum, the Jury Prize winner at Cannes and Foreign Language shortlisted entry from Lebanon about childhood as filtered through one young boy’s life on the streets of Beirut as he sues his parents for bringing him into this cruel world (Cannes reaction); Green Book, featuring terrific performances from Viggo Mortensen and Mahershala Ali in a film that brings two different men together for an eye-opening road trip that in the end gives up hope for humanity in a time we need it most (review); and director Rob Marshall’s impossible challenge in Mary Poppins Returns of finding a new voice for a beloved Disney classic and making a buoyant and wondrous sequel 54 years later that deserves to stand right beside the original (review).

To find out the exact order, and which film I name as the year’s best, go to the video link at the top of this post. Happy to say that three of my overall Top Ten are directed by women (Tamara Jenkins’ Private Life, Marielle Heller’s Can You Ever Forgive Me?, Nadine Labaki’s Capernaum)! Happy new year, everyone. Here’s hoping that 2019 turns out to be just as great a year at the movies as this one has been.