Continue to Deadline SKIP AD
You will be redirected back to your article in seconds
Skip to main content
February 26, 2021 3:28am 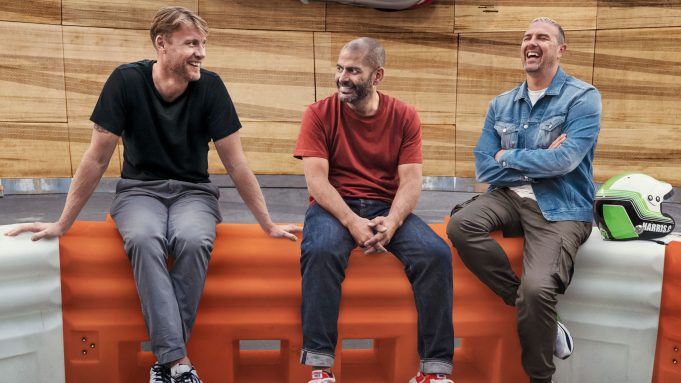 EXCLUSIVE: Top Gear has had to move out of its home at the Dunsfold race track for the first time since 2002 in order to film Season 30 studio elements.

Britain is in the middle of a long lockdown due to the coronavirus pandemic, meaning studio audiences are out of the question. The tight restrictions also ruled out Top Gear’s 2020 Covid-19 workaround, which involved staging the show in front of a drive-in audience at Dunsfold Park.

Instead, the Top Gear team, spearheaded by presenters Freddie Flintoff, Chris Harris, and Paddy McGuinness, recorded the links to the BBC motoring show during a two-night shoot at London’s iconic Television Centre.

Surrounding the Helios statue at the heart of the Television Centre complex was a ring of 20 supercars, including the Porsche Taycan 4S, three Aston Martins, and a Bentley Continental GT V8 Coupe, as well as some less-expensive cars from the host’s first road trip together.

Clare Pizey, Top Gear’s co-executive producer, said: “Once it was confirmed that we couldn’t have a studio audience, Alex Renton and I knew we needed a big rethink. A drive-in with no cars just doesn’t work. An empty hangar at Dunsfold would give us zero atmosphere – and in any case, Top Gear needs a sense of scale.

“So we are really pleased with the Television Centre solution. It’s iconic. It looks beautiful. The production team and local residents give it atmosphere. And it’s also, pretty much, working from home!”

Top Gear returns to BBC One soon and premieres on BBC America in April. Season 30 features Flintoff, Harris, and McGuinness being dragged across tarmac by The Stig in titanium shoes, as well as taking an emotional drive down memory lane in their Dads’ cars.

Check out the drone footage above to see the Television Centre shoot.