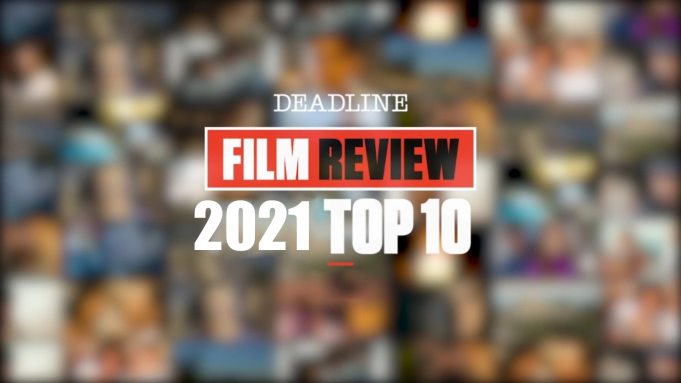 Certainly following the dismal, Covid-slammed movie year of 2020, anything would be an improvement, and in my opinion, against all odds, the movies of 2021 have exceeded my expectations. My obligatory Top 10 list certainly shows that and includes a large number of crowd-pleasers that “pleased” me too — in more that one case, surprisingly so.

If you had told me a year ago that this 2021 list would include an eighth Spider-Man movie, I would have gone to my bookie to quickly place large bets against that. Hell, if you had told me that less than a month ago (before I actually saw the Sony and Marvel box office blockbuster), I would have done the same thing. But so unexpectedly, and at just the right time, Spider-Man: No Way Home not only was an exceptionally well-crafted piece of entertainment that far outstrips all the others in the series, but it also gave me hope for the movies and the theatrical experience that I have known and loved my entire life. To see this in a theater is to witness a reason why we go to the movies in the first place.

Also, if you had told me this list would also include a big, expensive, effects-laden Ryan Reynolds action comedy set in the center of the video game universe, I would have had you committed. I know next to nothing about gaming, and both Tron films gave me headaches, but with perfectly pitched performances from Reynolds and a wonderful dual one from Jodie Comer (not to mention villainous Taika Waititi), you have a movie that is alternately hilarious, exciting and heartwarming. It is, in fact, at its soul channeling the spirit of a Frank Capra classic like It’s a Wonderful Life. I am happy audiences found Free Guy as engaging as I did.

I saw both the above-mentioned films in theaters with enthusiastic crowds; how they would have played on my couch I don’t know, and I really don’t want to know. This list is not meant to be a hit job on watching movies meant for the big screen instead of on your TV sets, it just is a strange fact that every one of them I experienced in a theater with the exception of a pair (Finch and Pig) that tied for a spot on my overall list (which, by the way, has two ties, bringing the total number to actually a Top 12. So sue me, I cheated).

If you are looking for an esoteric collection of movies favored by “slow cinema” fans or those critics who just can’t get enough art in their diet, you have come to the wrong place. My criteria is pretty simple: what moved me and still stands out weeks, months or even a year (see Sundance sensation CODA) later and has still stayed with me. There is a heavy emphasis on humanity in all of these, an important theme running through these selections, whether it be how we relate to our families, extended or otherwise; our coming of age; our relationship with non-humans and all God’s creatures; and even our innermost human instincts at the end of the world. Throw in some Sondheim influence in a couple of swell musicals, and those aforementioned comic book- and video game-inspired flicks, and you have an idea of what made the deepest impression on me this year.

You will notice there are some glaring omissions from this particular list because I limited eligibility. First and foremost, my list is made up entirely of films I reviewed for Deadline (I did some 140 or so in the past 12 months). Yes, I would love to have included, and almost certainly would have, some other movies reviewed by my colleagues — notably Todd McCarthy, who also offers up his list of 2021’s best and worst. Among movies he reviewed, I have the highest admiration for Jane Campion’s extraordinary and biting The Power of the Dog; Will Smith’s best work ever in the wonderful King Richard; and a family Thanksgiving like no other in the brilliantly acted film version of the Tony-winning Best Play The Humans, which is that rare film that exceeded an acclaimed stage production.

Separately, my colleague Nancy Tartaglione has curated a list of Deadline’s International Critics Line’s favorite international films of the year, and for my three choices I included movies that also otherwise easily would have made my Top 10 in any year. They all are films now shortlisted for the International Feature Oscar: Germany’s sly and sophisticated comedy I’m Your Man, with great performances by Maren Eggert and Dan Stevens in a movie that is at once contemporary but also harkens favorably to Hollywood’s golden age of screwball comedy classics; Japan’s Drive My Car, a prize winner at Cannes in July, and deservedly so, which even at three hours holds you every step of the way; and Paolo Sorrentino’s thinly disguised memoir of his own youth in Naples, The Hand of God, a welcome personal piece of cinema from a master of the medium.

Below is my Top 10 in no particular order; click on the photo above for my list as I count them down to No. 1.

CODA
The winner of a record four major prizes at Sundance was a story of a deaf family unit and the hearing daughter who must decide whether she will stay home to help her family or follow her own dreams. Based on a French film that hired hearing actors, this one is authentic to the core with a cast of deaf performers led by Oscar winner Marlee Matlin.

BEING THE RICARDOS
Aaron Sorkin’s brilliantly constructed look at the marriage and relationship of Lucille Ball and Desi Arnaz as told during a week in the production of I Love Lucy featuring stunning turns from Nicole Kidman and Javier Bardem, plus a marvelous ensemble bringing it all to life.

BELFAST
Director-writer Kenneth Branagh finds inspiration in going back 50 years to the Belfast of his youth and the family unit that kept everyone together during the Troubles in Northern Ireland.

DON’T LOOK UP
Adam McKay’s wickedly funny and clever satire recalls the best of Kubrick and Wilder in using the impending destruction of Earth to stand in for our own negligence towards climate change. An all-star cast delivers a strong message and a lot of laughs along the way.

PIG and FINCH (tie)
In Pig, Nicolas Cage delivers one of his best performances as a society dropout whose relationship with his only companion, a truffle-hunting pig, sets off a compelling and unforgettable drama set in Portland’s high-end restaurant scene. And in the must-see Finch, an apocalyptic event has wiped out the world as slowly dying survivor Tom Hanks builds an increasingly human robot in order to take car of his beloved dog once he is gone.

FREE GUY
Ryan Reynolds breaks out of his roles as an extra in a popular video game and goes rogue, causing havoc in the real world of frantic gamers and corporate greed. As funny and satirical as it is a movie that just might make you stand up and cheer.

THE TENDER BAR
George Clooney’s best directorial effort since Good Night, and Good Luck is indeed a tender look at how we make a family in this coming-of-age story based on J.R. Moehringer’s touching memoir. Ben Affleck has never been better, and Tye Sheridan and newcomer Daniel Ranieri share the role of JR in fine fashion.

TICK, TICK…BOOM! and WEST SIDE STORY (tie)
In a great year for movie musicals (that also includes Joe Wright’s lilting Cyrano), the late great Stephen Sondheim figured in two of them. In tick, tick…BOOM!, Bradley Whitford plays him as a mentor for Jonathan Larsen whose dream is to emulate him and find Broadway success before the age of 30. With Andrew Garfield an absolute revelation as Larsen, this feature directorial debut for Lin-Manuel Miranda is one of the joys of 2021. And in West Side Story, the first major credit for a then-27 year old Sondheim, the legendary Steven Spielberg makes his movie musical debut in a daring and timely reimagining 60 years later of the most Oscared musical ever that succeeds even for fans of the original who wondered why it should be remade.

LICORICE PIZZA
Paul Thomas Anderson’s latest is perhaps his lightest but also finest film yet. Returning to his beloved San Fernando Valley he takes a nostalgic spin to the early ’70s and creates a movie that is worthy of the best auteurs working at that time. With splendid debuts from Cooper Hoffman (Philip Seymour Hoffman’s son) and Alana Haim as the much older, 25ish object of his affections, plus riotous supporting turns from Bradley Cooper, Sean Penn and others, this deliciously entertaining movie  stands apart in style and substance from just about anything else in recent times.

SPIDER-MAN: NO WAY HOME
There is a reason this eighth Spider-Man towers above the rest and has scored so high at the worldwide boxoffice. It is that rare so-called blockbuster franchise film that finds its own heart and its own way to exceed any expectation from its well-worn genre. From director Jon Watts this is a triumph that might just save the movies, but at the very least show future filmmakers the smart way forward.