Continue to Deadline SKIP AD
You will be redirected back to your article in seconds
Skip to main content
January 2, 2020 12:55pm
6Comments 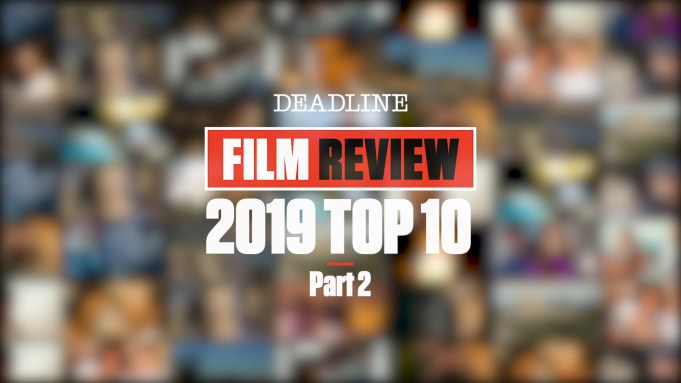 On Tuesday I presented the first part of my two-part series on Deadline’s Top 10 Best Films of 2019, and now today we complete the list, revealing my Top 5 and ending with my No. 1 choice: my favorite film of 2019.

Of course as I wrote earlier this week this is all very arbitrary and extremely difficult to put very different movies in boxes and try to choose numerically which one is better than the other. The year 2019 was a very good year in general for movies, and it was a great year for true auteurs and brilliant directors making films that not only stand with the best they have ever done, but also perhaps the best of all time.

When you have a year with outstanding movies from the likes of Martin Scorsese, Quentin Tarantino, Fernando Meirelles, Bong Joon-Ho, Noah Baumbach, James Mangold, James Gray, Greta Gerwig, Jay Roach, Rian Johnson, Todd Haynes, Clint Eastwood, Sam Mendes (or should I say Sir Sam Mendes since he was just knighted), Terrence Malick, Taika Waititi, Marielle Heller, Josh and Benny Safdie, Ari Aster, and more, I think you would have to agree 2019 produced some real gems, and not just the Uncut kind. It was very hard to limit this list, and particularly to name a Top 5.

Today’s top 5 includes a life-affirming movie about a historic meeting between two iconic men that not only has heart, humor, wisdom and intelligence. but it also serves as something timely and important in showing a divided world the best path forward is simply to find a middle ground and talk. The list also includes a movie with action to spare about a sport full of it, but one that unlike many movies in the same genre has a human core and a personal story that in the heat of a race also manages to give us hope for the human race too. And there is an international, much acclaimed film that comes from a true master of cinema who has made a universal story of family and class divide that is stunningly original while staying true to its local origins; it has taken the cinematic world by storm and may be on the cusp of making history.

And then there is a truly singular and extraordinary feat of sheer filmmaking art and prowess, a story set in war that reaches far beyond the rules of the genre to use almost unimaginable technology and craft to tell an emotional and heart-pounding tale of courage and survival. Also in the mix is another movie from a true master and student of the movies who has made perhaps his most personal film yet (even if he says all his films have a personal connection) with a fairy tale of sorts that is not only wistful, bittersweet, unique and unexpected, but also a love letter to movies and the town where this one was made.

Hopefully those brief descriptions will make you want to check out my video rundown above. Enjoy, and Happy New Year. Here’s hoping 2020 has films as good as these in store.