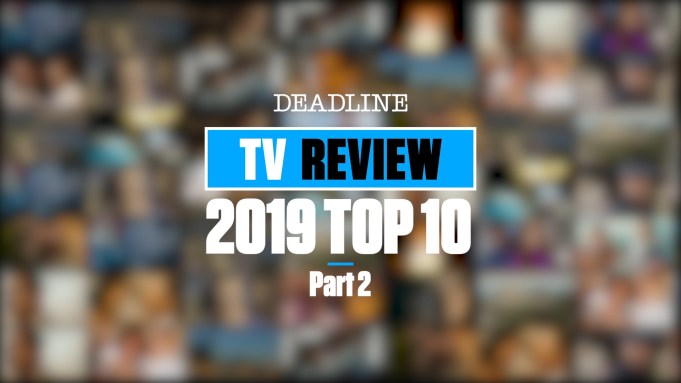 SPOILER ALERT: This video contains details of some of the greatest series that TV had to offer this year. In fact, it lists series that Deadline’s Chief TV Critic thinks are the Top 5 New Shows of 2019. You have been warned.

Happy New Year and welcome to the roaring twenties, 21st century style. Coming off a decade in which streaming succeeded in changing almost everything about the entertainment business, the second part of our Top 10 new TV shows of 2019 is subsequently full of game-changers galore.

To discover who made the Top 5 and which series is No. 1, click on the video above.

No spoilers, before you watch the countdown and if you are feeling a bit Sherlock Holmes this first day of 2020, you might engage in a spot of deduction. Disney+’s Star Wars spinoff The Mandalorian was No. 10, followed by Apple TV+’s space-racing For All Mankind and a dead heat at No. 8 with CBS’ Evil and Netflix’s Russian Doll. Hulu’s Ramy and Showtime’s Work In Progress wrapped up the first part of the best of the small screen from last year – as you can see here.

Of course, 2019 was a year that saw the likes of Game of Thrones, Orange Is the New Black, Transparent, The Big Bang Theory, Veep and Fleabag say farewell. It was a year that also had a number of damn fine debut seasons that deserve honorable mention in this era of still-peaking TV – as you can see in today’s video.

So, like I said last year and the year before that, click on the video above to discover who made our Top 5. If you agree (or disagree) with the selection, drop me a line – you can reach me on Twitter at @DeadlineDominic.

Hello 2020, we’re ready to engage, as a certain Starfleet captain used to say.