Continue to Deadline SKIP AD
You will be redirected back to your article in seconds
Skip to main content
June 10, 2019 8:42am 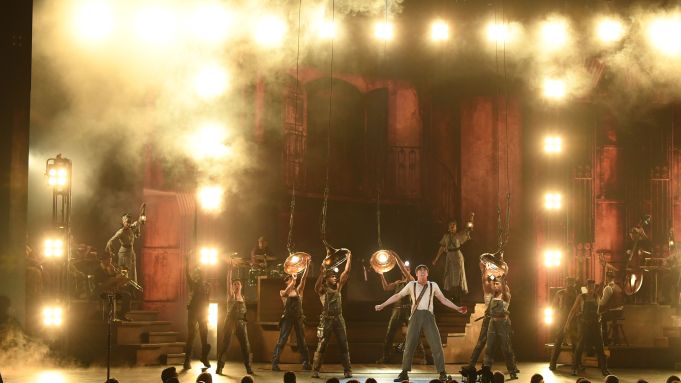 Last night’s Tony Awards broadcast on CBS gave this year’s nominated musicals a prime time chance to show the nation what Broadway audiences have been humming about, and for the most part the stage productions made solid choices as to the numbers they chose to put forward.

Hadestown, named Best Musical, smartly chose to have Andre De Shields – winner of the best featured actor/musical – perform the scene-setting (and plot-explaining) intro to set the stage for Reeve Carney’s performances of the show’s glorious “Wait For Me.” For national audiences not acquainted with the show’s premise (it’s based on ancient Greek myths of Orpheus and Hades), the number was a good primer, and made a strong case for the victory.

Watch “Wait For Me” above.

Next up was the crowd-pleasing Ain’t Too Proud, the Temptations jukebox musical, which featured  a medley of the title song, “Just My Imagination” and “I Can’t Get Next to You.”

Santino Fontana led the cast of Tootsie in “Unstoppable,” the big transformation scene in which his Michael Dorsey turns into Dorothy Michaels, and makes a good case for his Tony win as best leading actor/musical:

Oklahoma!, winner of best revival/musical, combined two numbers – “I Cain’t Say No”, performed by best featured actress/musical winner Ali Stroker and then the rousing cast performance of the title song, led by nominee Damon Daunno (as Curly). A little context: In the revival, the characters, just before reprising this beautiful, boisterous classic, have witnessed a scene of bloody, shocking violence, an act that falls somewhere between suicide and murder and in which the entire community is complicit. Notice the various expressions on each face, like the confusion and anger of Rebecca Naomi Jones’ Laurey.

Beetlejuice did a similar mash-up of two songs from the musical, including “Day-O (The Banana Boat Song)”, a favorite from the movie version, and the original “The Whole Being Dead Thing,” which star Alex Brightman performed with some custom-made lyrics for the night (including a nod to audience member Adam Driver and his Star Wars gig).

Next up, the cast of The Prom performed a medley of “Tonight Belongs To You,” a sweet number between nominees Brooks Ashmanskas and Caitlin Kinnunen, which leads into the full-cast showstopper “Time To Dance” with the kiss seen ’round the Macy’s Parade last Thanksgiving)…

Then, the cast of Choir Boy performed “Rockin’ Jerusalem,” certainly the dance highlight of the “play with music,” choreographed by nominee Camille A. Brown.

Kiss Me, Kate‘s choice for the night was the classic “Too Darn Hot,” a big, all-feet-on-deck song and dance number that served as effective counter-programming to the subversive approach of its competitor (and winner) Oklahoma!

And finally, Stephanie J. Block no doubt fooled at least some of the people some of the time into thinking they were watching the actual Cher, as the Tony-winning Block took the stage in her full-on Oscar-era Cher get-up. She was soon joined by Teal Wicks and Micaela Diamond (as the TV variety show-era Cher and the Sonny & Cher-era Cher, respectively), all singing “Believe,” and soon joined by an ensemble of other-era Chers.