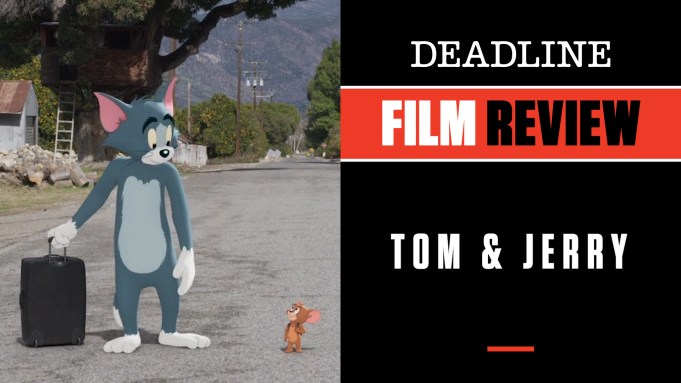 After 80 years, Tom and Jerry still have it.

That is the very nice thing to report about the latest reboot of the iconic Hanna-Barbera cartoon superstars, who now headline their first hybrid live-action/animated feature. It might not hit the heights of the brilliance of Who Framed Roger Rabbit in this subgenre of toons, but the film serves up the expected slapstick and laughs thanks to the cartoonishly violent antics of its title stars — if not the perfunctory actions of the humans on board for this adventure.

Tom & Jerry, from director Tim Story and his screenwriter Kevin Costello, does not represent the first time these icons of cinema have shared a movie screen with human beings. Who can forget their lavish underwater musical number opposite Esther Williams in 1953’s Dangerous When Wet, or the joy of watching them opposite Gene Kelly in the ’40s musical Anchors Aweigh, especially that dance number with Kelly and Jerry Mouse? But now they topline their own film with a human cast, and the best parts still are watching this mismatched pair go at each other in a cat-and-mouse game for the ages.

The actors starring opposite them could only hope to grab our attention in the same way. What Story has done that is best of all is to remain faithful to the look and style of what Bill Hanna and Joe Barbera created eight decades ago, employing 2D animation, hand drawn for a true cartoon feel. These golden-era stars definitely do not look like they have had a CGI facelift, thank God, and the integration into the live-action scenes is seamless and wholly entertaining. It serves as a swell introduction for a new generation, if they haven’t already devoured T&J in other incarnations, as well as a nice nostalgic trip for their parents. It should do very well, with Warner Bros launching the film simultaneously in theatres this weekend, along with a 31-day run on HBO Max. Families, it seems, are starved for this kind of thing during the pandemic.

Plot-wise, the focus is on the Royal Gate, a swanky NYC hotel that’s getting ready to host its biggest wedding in some time — the Bollywood-flavored nuptials of social media Manhattan society stars Ben (Colin Jost) and Preeta (Pallavi Sharda). Ben wants to go big for his bride-to-be from India, while she would prefer something small. As the film goes on, you will see he gets his way, bringing in two large elephants, a tiger and other accoutrements; it’s a recipe for disaster.

Meanwhile, hotel brass led by manager Dubros (Rob Delaney) and his events director Terrence (Michael Peña) want it to go off without a hitch, when in walks Kayla (Chloë Grace Moretz), a young woman meant to hand-deliver someone else’s résumé but at the last minute passing it off as her own. She has no experience but gets the job with this deception, immediately raising suspicion from Terrence, who sees her as moving in on his territory. The real problem for all of this is that a mouse (Jerry) is somehow loose in the hotel and must be caught before the ceremony but has eluded staff members so far. Before hitting the hotel, Jerry gets into it — as usual — with a jazz piano-playing grifter cat (Tom) in Central Park. It turns into a disaster, naturally, but Jerry makes a break and heads into the hotel in search of nicer digs. Not far behind, Tom makes his presence known and, with Kayla’s support, lands a job as just the cat to catch this mouse and save the day.

Manic shenanigans ensue, also involving Chef Jackie (Ken Jeong) and others on the staff including kind barman (Jordan Bolger). Oh, there’s also a crafty bulldog, Spike, staying at the hotel with the engaged couple, as well as a pretty feline belonging to Preeta. A rapping pigeon (voiced by Story) and a bunch of alley cats led by Butch round out the supporting creature cast. It is all harmless fun delivered in zany style, and it’s nice to have Tom and Jerry back where they belong, and thankfully not talking. They certainly don’t need to do that. Like true film stars they say it all with their actions.

Producer is Chris DeFaria. Check out my video review with scenes from the movie at the link above.

Do you plan to see Tom & Jerry? Let us know what you think.