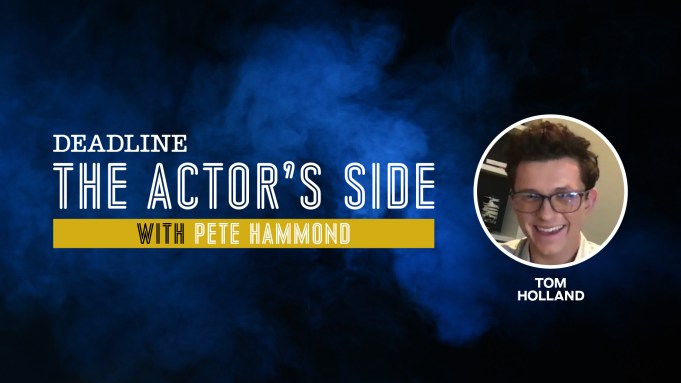 Tom Holland is only 24 and has been acting most of his life — and in very high-profile projects ranging from his stage sensation Billy Elliot  to his secure place in the MCU as Spider-Man. Now he’s on to his most challenging dramatic role to date in Cherry, an epic story told in six chapters and independently made by the Russo Brothers (watch for my review of the film on Thursday).

Appearing on this episode of my Deadline video series, The Actor’s Side, Holland says he was pretty much gobsmacked when Joe and Anthony Russo offered him the title role in Cherry, especially as he says they could have had anyone they wanted and chose him. But why not? From Captain America: The Winter Soldier to Avengers: Infinity War and Endgame, he — and they — have benefited enormously from his signature role as Spider-Man. And now with the upcoming Spider-Man: No Way Home, his third stand-alone spin in that franchise, Holland has become a major star.

Cherry, however, is a whole new deal — a complex story of a troubled young man spanning six chapters in his life and also dealing with a descent into heroin addiction. The Russos have presented their star with a role that includes a love story, war movie, crime saga, drug tale and prison drama all in one. We talk about how he pulled it off, the research that went into the harrowing drug sequences and how he felt like “the worst soldier ever” in the war scenes, in which he plays a medic in the heat of battle that freaked him out to the point that he had to keep stopping.

He also discusses how aging several years showed him what he might look like three decades from now and why he didn’t like what he saw. He tells about shooting the latest Spider-Man — which he says is the best one yet — in the midst of a pandemic, why he loved doing voice-over work in animated films Spies in Disguise and Onward and the reasons he became an accidental dancing star that led to the career he has now.

To watch our conversation, just click on the link above.