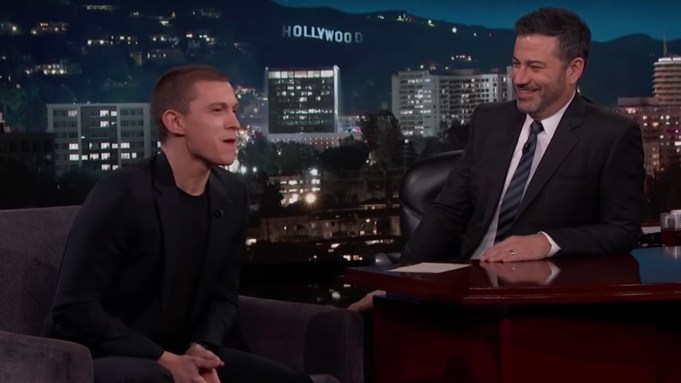 Spider-Man star Tom Holland put a tipsy spin on Disney CEO Bob Iger’s explanation for how the web-slinging character was welcomed back into the Marvel Cinematic Universe.

During last night’s visit to ABC’s Jimmy Kimmel Live!, Holland was asked about an anecdote Iger had previously made on the show in which an emotional phone call from the actor to the CEO had helped move the character back to his Marvel home.

Holland’s version begins at this year’s D23 Expo, where the actor felt excluded from all the MCU celebrations (Spidey was, temporarily it turned out, a victim of the Disney-Sony negotiations.) At the expo, Holland and Iger promised to re-connect to talk things over.

So far, their stories match up. But Holland tells Kimmel that when Iger phoned, the actor was “three pints in” at a pub.

“I get a phone call from an unknown number and I have a feeling,” Holland says. “I’m like, ‘I think this is Bob Iger but I’m drunk.’”

Though Holland denies that the agreement – in which Sony agreed to Disney’s terms for a third Spider-Man movie – was “entirely” his doing, things did indeed work out. Watch the clip above to see exactly how. The topic arrives at about the 9:45 mark.