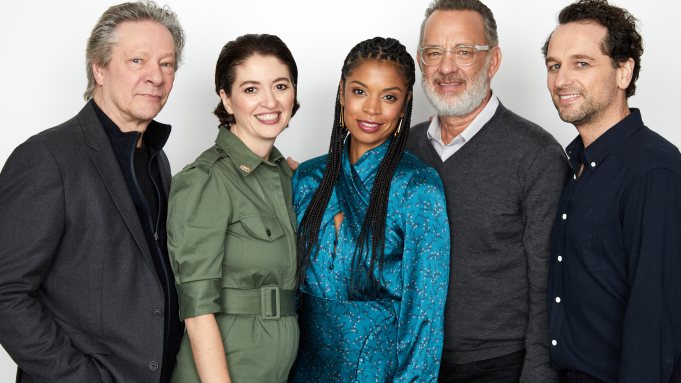 Rather than being a full-on biopic, Sony’s A Beautiful Day in the Neighborhood takes us into Mr. Rogers life through the eyes of a 1998 Esquire journalist played by The Americans Primetime Emmy winner Matthew Rhys in the Sony film.

Rhys plays Lloyd Vogel, an investigative journalist who is given a small profile assignment about Fred Rogers, which is part of a bigger Hero series that the magazine is publishing (Vogel is based on real Esquire journo Tom Junod). Vogel heads out to PBS station WQED in Pittsburgh where Rogers records his show with black eye from an altercation he had with his father at a family wedding. As Vogel tries to get to the heart of Rogers, it’s Rogers who gets to the heart of Vogel, and all the pent-up anger he has about his father (played by Oscar winner Chris Cooper). All the while, Vogel can’t buy Rogers’ good guy shtick and believes there’s something darker in the children’s show host.

Hanks captures Rogers’ absurdist nature, and angelic soul, and despite Vogel’s doubts about the man, believes Rogers was the real deal.

“The dark side of Fred is that he was not a saint, that he was just a regular human being. He had boys that he raised, and did both a great job, and the job that every father and son does, which is no small amount of mistakes. He was not 100% sure of what he was doing all the time, and he had to rail against, I think, the constant questioning of his genuineness,” says the two-time Oscar winner.

“No one can quite believe; there must be some ulterior motive and agenda that he has. Otherwise, why would he be putting on such an all-encompassing, never-ending act of being this guy who wants to find out about you?” adds Hanks.

“And it was not an act. There was a jujitsu aspect of it, because I think at the end of the day, he didn’t have any massively dark secrets. But he understood that the relationship that he had with almost anybody was almost a ministerial one. You can see it over and over again. He says, ‘Well, you must have some dark secrets.’ ‘Well, of course I do. I have pressures on me, just like you have pressures on you. How do you deal with your pressures?’ So, he was a Presbyterian minister that took his calling as a higher request, and he took his job very, very seriously, but he did not take this kind of ongoing questioning of, ‘Why are you doing this?’ kind of a thing. He was doing it because it was a good thing to do. There’s an awful lot of people who won’t accept that as an answer, but that was his answer,” says Hanks.

Check out our TIFF interview above with A Beautiful Day in the Neighborhood stars Hanks, Rhys, Cooper, Susan Kelechi Watson and director Marielle Heller. The Sony release opens on Nov. 22.