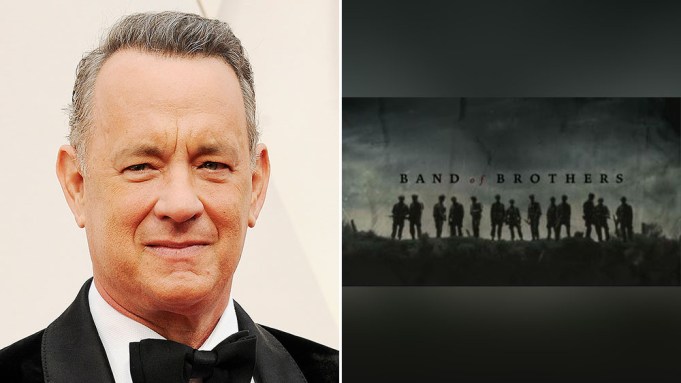 EXCLUSIVE: “Anybody seeing this for the first time will be saying, alright, tale away the amount of celebration of nostalgia, this is an examination of the human condition” says Tom Hanks of the seminal Band Of Brothers miniseries. “What do you think? What would you do?” asks the co-creator of the HBO miniseries in a new podcast to commemorate the 20th anniversary of the multiple Emmy winner.

Take a look at the trailer for the BoB podcast above.

Long a chronicler of the Greatest Generation and the realities they faced when literally everything was truly on the brink during World War II, the multiple Oscar winner is the first guest on the premium cabler’s podcast that debuts on September 9 — the literal 20th anniversary of the Steven Spielberg co-created show’s premiere.

Hosted by Men In Blazers vet Roger Bennett, the 12-part podcast of (in my opinion) one of the greatest miniseries ever will examine each episode of Band of Brothers starting with a double dose next week with a prologue and the Hanks co-penned ‘Currahee’ first episode. In focusing on the tale of “Easy” Company, 2nd Battalion, 506th Parachute Infantry Regiment, of the Division, the ‘Currahee’ podcast will have actor Ron Livingston, who played Captain Lewis Nixon as its guest.

Subsequent episodes will have interviews with the likes of fellow BoB alum and Billions star Damian Lewis and others connected to the miniseries. In addition to speaking with primary cast and creatives, the podcast based on historian Stephen E. Ambrose’s 1992 best seller of the same name aims to peel back how the show was put together and look at its pretty stellar legacy. As with previous HBO podcasts, the BoB podcast will be available on Spotify, Apple Podcasts and other major platforms.

“Band of Brothers was such an important show to me”, Bennett tells Deadline. “Like thousands, I watch it every year ritually. The face of an America I grew up believing in. Of everyday heroism, selflessness, and Global Leadership.”

In a nation that is also approaching the 20th anniversary of the terror attacks of 9/11 and has officially just ended the nearly 20-year “forever war” in Afghanistan,  Band of Brothers holds a distinct place in the national consciousness. It is also a remembrance of heroes of the great Allied force of World War II that we are losing to the passage of time – literally and figuratively.

“In June 2020, there were approximately 300,000 Second World War veterans still alive,” Bennett notes. “By June 2021, that number had dwindled to just 100,000. The youngest who once served are now in their late nineties,” the broadcaster and Reborn in the USA: An Englishman’s Love Letter to his Chosen Home author added. “Indeed, of Easy Company, only one man, Col. Edward Shames, survives, he is now 99.”

“When you read those numbers it becomes clear why the Band of Brothers story becomes more important as the years pass. These remarkable men are no longer alive to pay witness and tell their stories themselves. It is simply unfathomable to imagine what would happen if their narrative fades in our national consciousness”.

With that, the Lewis, Livingston, Michael Cudlitz, Donald Wahlberg, Kirk Acevedo, David Schwimmer, Scott Grimes, Dale Dye, Eion Bailey and Dexter Fletcher, among many others, starrer can be seen right now on HBO Max if you want to experience Band of Brothers again before the podcast debuts.