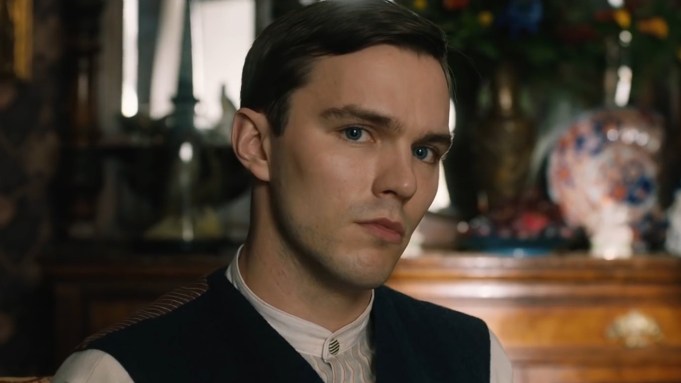 With the wild box office and critical and awards success of The Lord of the Rings trilogy, not to mention The Hobbit trilogy, it seemed only a matter of time before Hollywood knocked on the door of the man who created these Middle Earth saga. J.R.R. Tolkien’s estate will have none of it, respecting the late author’s privacy, but that didn’t stop director Dome Karukoski and screenwriters David Gleeson and Stephen Beresford from giving it the old college try.

Tolkien is a handsome and well-appointed origin tale that serves up the young future creator of all things Hobbit when none of that was remotely on his mind. This film chronicles the boy who would be king of the Rings, a rather tragic upbringing in some respects as he was orphaned after first losing his father at a very young age, then his mother. He went on to experience loss, at least temporarily, with a forbidden college romance and then service in World War I, where he saw two of his best mates lose their lives.

The story follows Tolkien in his youth when he and his brother are turned over to Father Morgan (Colm Meaney). He promised the mother on her deathbed that he would look after the young man as he makes his way in the world, especially at Birmingham’s King Edwards School, where the focus is on the usual camaraderie between a spirited and tight group of friends in academia (Anthony Boyle, Patrick Gibson, Tom Glynn-Carney), as well as his attraction to shy piano prodigy Edith Bratt (Lily Collins). Their big hope is to see Wagner’s Ring Cycle, he for the mythology, she for the music. However, Father Morgan blames the boy’s preoccupation with Edith as a reason for his dropping grades and puts the kibosh on the budding romance, telling Tolkien he will have to obey his orders until he is 21.

The Great War intervenes, and Tolkien and his classmates are drafted and experience the horrors of what was to be the “war to end all wars.” His promise to Edith was that he would come back alive, but not all of his buddies were so lucky.

Although fans of the immortal books he would publish in the 1930s might come to this film expecting at the very least some clues to their origin, there is really very little of that beyond general inspiration, his stated interest in myths and legends and his interest in languages (a must for the man who would create Elvish). At the screening I caught, however, it was apparent that a few diehard LOTR and Hobbit fans definitely saw what they perceived as clear signals of his future calling, influences along the way. Read into it what you will, but Tolkien (pronounced Tol-keen, as one professor clearly is taught in an early scene) is closer in romantic spirit to The Theory of Everything, which introduced us to the young Stephen Hawking in a similar way as this film.

Finnish director Karukoski blends the college world with vivid and harrowing scenes of war expertly. The visuals are outstanding, as are the superb performances of Hoult and Collins. Thomas Newman, as usual, supplies a musical score that nicely underlines the proceedings. There is much to admire here for fans of Tolkien and perfectly pitched British cinema. Producers are Peter Chernin, Jenno Topping, David Ready and Kris Thykier. Fox Searchlight, now under the purview of Disney, releases it Friday. Check out my video review above which includes scenes from the film.

Do you plan to see Tolkien? Let us know what you think.