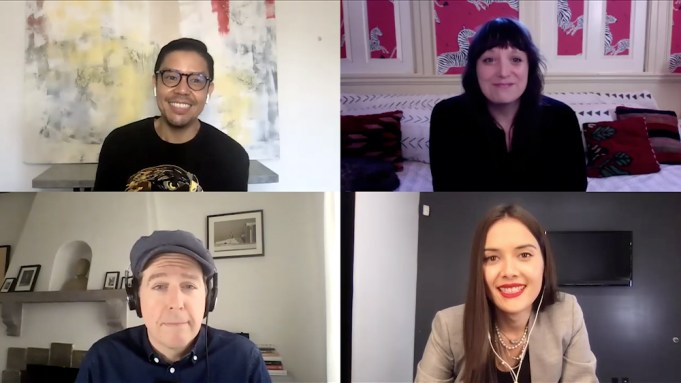 In Nikole Beckwith’s Sundance comedy Together Together, the filmmaker tells a refreshing story of Matt (Ed Helms), a 40-year-old single man who hires Anna (Patti Harrison) as a surrogate. The result? A look at a very different kind of platonic love between two people that is seldom put on film. Beckwith, Helms and Harrison joined us in Deadline’s virtual Sundance Studio to talk about the film and how it is the equivalent of a cinematic hug.

Beckwith said that the film came from a curiosity about what would happen between two strangers who go through such an intimate experience.  “I started writing because I wanted to see what happens,” she said. “And I wanted to tell a different kind of love story because there are so many different kinds of love and I think we tend to, as a culture, focus on just romantic love… I feel like we even fall in that kind of love less than the other kinds of love.”

The film explores fatherhood and we see the development of a different kind of modern family. Helms connected immediately with the “warmth and humanity” of the script while Harrison was apprehensive because she thought it was going to be a typical rom-com but it “subverted her expectations in an exciting way”.

The title of the film speaks to the landscape of today as the world is on lockdown and being with friends and family has become increasingly difficult. Together Together tells a warm story and value of having loved ones in your life. Beckwith said the film wrapped in October 2019 and she finished editing while in quarantine. She said she was grateful to have the film in her life. “It is a kind, intimate film…and I needed that kindness,” she said. “It feels nice to put something like this out in the world when we are needing to be nourished that way.”

Together Together was acquired by Bleecker Street ahead of its premiere in the U.S. Dramatic Competition section. The film will have its world premiere today at 1PM MT/12PM PT on the Sundance Film Festival online platform.