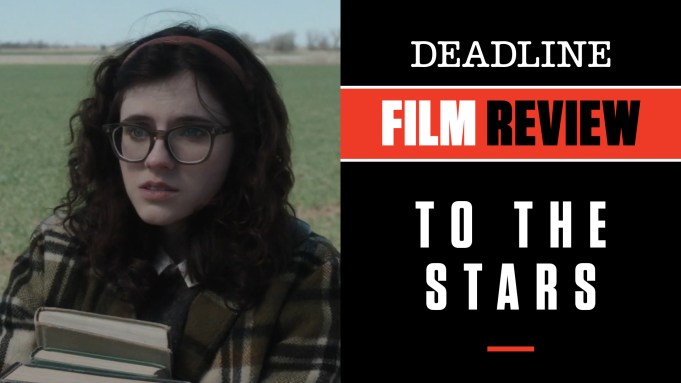 Although it is nowhere near the level of Peter Bogdanovich’s landmark 1971 classic The Last Picture Show, which was set in the waning days of a small Texas town in the ’50s, Martha Stephens’ To the Stars is an appealing look at two very different high school girls in a tiny Oklahoma town circa 1960. It makes a nice attempt to tell a coming-of-age story from a female point of view — it’s driven by women’s voices behind the scenes, too — and that makes it refreshing indeed when taken on its own terms. Add in some talented actors and you have an entertaining, if slight, movie that aims to speak to a contemporary audience by revisiting the past to show how far we have — or haven’t — come. At its core it is about people searching for fulfillment and trying to find who they really are inside.

With a script by Shannon Bradley, the simple story revolves around two girls, Iris and Maggie. Iris (Kara Hayward) is a shy, young student bullied by boys and shunned by the local “mean girls.” She wears oversized glasses and keeps to herself, all the while having a crush on a schoolmate named Jeff (well played by Lucas Jade Zumann), who also seems to have been eyed weirdly by Iris’ embittered and alcoholic mother Francie (Jordana Spiro) in an awkward encounter. Francie is also determined to get her daughter to be what she wanted to be in school, and to succumb to her own standards of becoming a guy magnet, but in so doing puts her down in ways that don’t help matters. Fortunately, Iris’ hardworking father Hank (Shea Whigham) who offers the kind of support she doesn’t get from mom.

Maggie (Liana Liberato) is the new girl in town with a bit of a mysterious past, having to move suddenly with her family from the big city to this tiny Dust Bowl town. She, unlike Iris, is a real whirlwind of energy and personality, and early on she comes to Iris’ rescue when she is being harassed by some unenlightened male students. Clearly Maggie is a take-no-prisoners type, but as the film, and their new  friendship, continues, we learn she has her own needs and emerging sexual awakening that doesn’t exactly jibe with the town in which she is now living.  Her parents, Grace (Malin Akerman) and Gerald (Veep’s Tony Hale), are seemingly good people if a bit distant, even if Maggie feels she has to inflate her father’s profession by claiming he was a Life Magazine photographer rather than just a guy who works for an agriculture publication.

Maggie tries to help Iris, bringing her out of her shell, changing her hairstyle, making her more outwardly desirable, jumping sans clothes into the lake and so on. Iris is at first resistant but slowly emerges from her cocoon. The two girls form an unusual bond in a complex relationship that takes some surprising turns.

The acting is excellent all around, even if the male characters are just on the periphery — nice for a change. Liberato and Hayward are superb. Especially good here is Adelaide Clemens as the local hairdresser Hazel Atkins, whose own suppressed sexuality portends a key plot development. Although set in 1960, this is not a movie that likely could have been made in the time it takes place with anywhere near the level of honesty To The Stars has.

One big drawback for me is the film’s soundtrack. These types of period coming-of-age movies, films like the aforementioned The Last Picture Show and American Graffiti, usually have strong song selections that instantly trigger memories and evoke what was happening musically then. This one instead apparently couldn’t afford clearances on the hits of the era, so is riddled with a lot of songs no one could possibly recall or has ever heard of. I kept wondering if the radio stations these characters are listening to ever played Top 40. Apparently not. Heather McIntosh’s lovely score almost makes up for the generic tunes in the rest of the film.

Producers are Kristin Mann, Laura D. Smith, Stacy Jorgensen, Gavin Dorman, and Erik Rommesmo. Samuel Goldwyn Films is the distributor, picking it up from the 2019 Sundance Film Festival where it was in the U.S. Dramatic competition. It is out on digital today and migrates to on demand on June 1.

Check out my video review above with scenes from the film. Do you plan to see To the Stars? Let us know what you think.