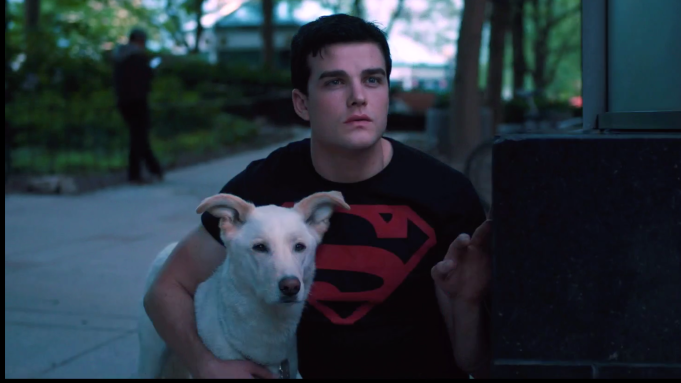 The DC Universe series Titans returns to the subscription streaming service with its Season 2  premiere on Sept. 6 and the just-released trailer gives viewers a good look at some incoming cast regulars, which include a powerful new ally (Superboy/Connor Kent, as portrayed by Joshua Orpin), a ruthless old foe (Deathstroke/Slade Wilson, as played by Esai Morales), and a new arrival with unclear intentions (Ravager/Rose Wilson, daughter of Deathstroke, as played by Chelsea Zhang).

The trailer also gives fans of the gritty series a good look at the show’s most fetching new addition: Krypto the Superdog.

The super-powered pup from the doomed planet Krypton was introduced in the pages of DC Comics way back in 1955 and has been featured in numerous animated TV shows (including two seasons of Krypto, his own Cartoon Network series) and will be the main character in DC Super Pets, the animated Warner Bros feature film set for 2022.

Krypto (and his human companion, Connor Kent) each made their live-action debut in a post-credits scene from the Season 1 finale of Titans. (The series Smallville featured a look-a-like super-dog in one 2005 episode, but he was born on Earth and named Shelby. Anyone who counts that as a genuine Krypto appearance is barking up the wrong tree.)

The new trailer also features the new Bruce Wayne, Game of Thrones alumnus Iain Glen. Here’s the lowdown on Season 2 in an excerpt from the production synopsis for Titans:

“In Season Two, following the aftermath of their encounter with Trigon, Dick reforms the Titans. Under his supervision in their new home at Titans Tower, Rachel, Gar and Jason Todd (new series regular Curran Walters) train together to hone their hero abilities and work together as a team. They are joined by Hank Hall and Dawn Granger aka Hawk and Dove (new series regulars Alan Ritchson and Minka Kelly) and Donna Troy aka Wonder Girl (new series regular Conor Leslie). Although these original Titans attempt to transition into a regular life, when old enemies resurface everyone must come together to take care of unfinished business. And as this family of old and new Titans – including Conner Kent (new series regular Joshua Orpin) and Rose Wilson (new series regular Chelsea Zhang) – learn to co-exist, the arrival of Deathstroke (new series regular Esai Morales) brings to light the sins of the old Titans which threaten to tear this new Titans family apart once more.”