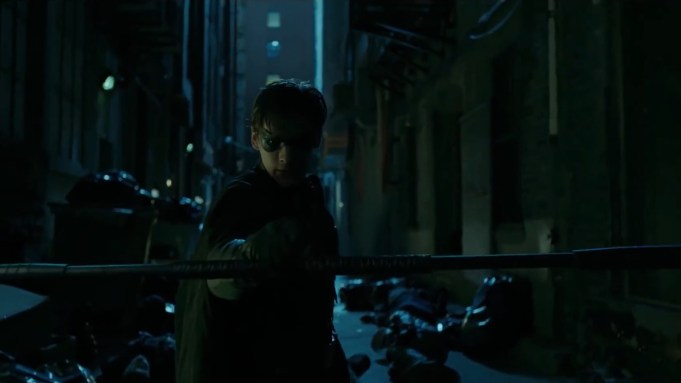 Content may be king in the small-screen hierarchy but context is everything, and Titans seeks to establish early on that this DC Universe series is not for kids. One well-placed “f*ck Batman” by Brenton Thwaites’ Robin in the series created by Akiva Goldsman, Geoff Johns and Greg Berlanti that debuts Friday may seem pedantic, but it squarely sends up a flare for the first live-action original scripted effort on the Warner Bros subscription service.

With that mission accomplished, the series formerly based at TNT effectively sheds the cartoon trappings that have housed the younger-generation subset of the Caped Crusader- and Superman-dominated world, and then it takes a surprising turn. Not to give anything specific away, but the sometimes overly gritty Titans evolves into being witty and heartfelt, with the stragglers evolving into a family of sorts.

Now, as New York Comic Con attendees saw a bit last week, those turns take a Brad Anderson-directed pilot and another episode of ultra-violence to get to for the already renewed Titans, and that might be hard going for some. But stick with Titans as new episodes drop every Friday, because it’s worth it.

As now police detective Dick Grayson pulls further away from his murderous Gotham mentor, and the Detroit-based superheroes come together around the coming-of-age tale of Teagan Croft’s demonic-powered Raven, Titans swerves to a much more visceral and emotionally persuasive curve than the Arrowverse of Berlanti’s CW empire.

Put it this way, the series co-starring Anna Diop, Ryan Potter, Minka Kelly and Alan Ritchson isn’t Netflix and Marvel’s soon-to-be-returning Daredevil. But that is the end game the 12-episode first season clearly has its sights on, with more than a little bit of the Johns-penned Watchmen spinoff Doomsday Clock in the mix.

As I say in my video review, that’s not such a bad or profane way to launch a new platform that features both tried-and-true names and new faces. Click on the video above for more of my take.