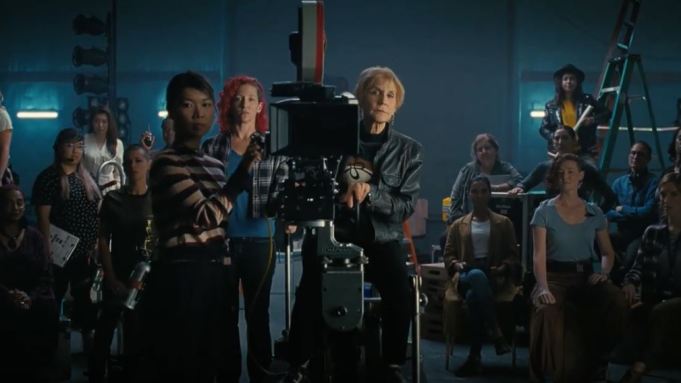 The Time’s Up Foundation has launched an awareness campaign to encourage more women – especially those who have been historically underrepresented in entertainment – to consider careers in behind-the-scenes jobs in film and TV production. The campaign includes a 30-second PSA narrated by Ava DuVernay and a resources guide to help newcomers get started.

Check out the PSA above.

“We know that diverse workplaces are safer workplaces, and as part of our commitment to improving safety in the entertainment industry, Time’s Up is advocating to make sets more inclusive and equitable,” said Tina Tchen, president and CEO of the Time’s Up Foundation. “This PSA and our new resources work hand-in-hand to show people the world of possibilities that are out there, and that women are capable of excelling at jobs that have traditionally gone to men.”

Says the resource guide: “On any given film or television set, there’s a wide range of jobs including lighting, sound, stunts, costumes, production designers, and beyond that help bring a story to life. Together, with our Women’s Production Group, we created this Public Service Announcement and complimentary resource page to shine a light on women in production, and to help you explore some of the many on-set careers available to you. We’ve provided job summaries, union requirements, and links to programs and communities that support those who want to build a lasting career in the entertainment industry.”

See the guide in full here.

The idea for the PSA came from the Women’s Production Group, a self-organized community within Time’s Up founded and led by Dana Belcastro, head of physical production for Solstice Studios; Sara Fischer, head of production for Shonda Rhimes’ Shondaland production company; and Debra Bergman, Executive Vice President & Head of Production, Paramount Television Studios.

“We’re so pleased to see the attention paid to the need for more women directors and cinematographers, but let’s be clear: when it comes to diversifying our sets, you have to also focus on the production roles on set,” Fischer said.

“On any given project, there’s only one director and one director of photography, but there could be 10 grips, 10 electricians, 20 drivers, and 15 carpenters,” Bergman said. “These are good, well-paid jobs that more women should know about and be hired for.”

Last year, the USC Annenberg Inclusion Initiative released a study that found that of the 265 top-grossing films released between 2016 and 2018, there were zero female gaffers; only one female best boy electric; four female grips; and eight women best boy grips. Only 2.3% of composers, 15% of editors, and 18.3% of production designers were women. And the numbers were even worse for women of color, who accounted for zero directors of photography, 1.4% of editors, 1.5% of production designers, and 1.6% of producers.

The campaign hopes that by “educating women everywhere about job opportunities in production,” it can “move the industry closer to gender and racial parity.”

“Besides what are traditionally women led departments such as makeup, hair, and costumes, I am one of the very few women of color in a leadership position on a television or film set,” said Shawn Pipkin-West, a first assistant director for Raising Dion and Grey’s Anatomy who appeared in the PSA. “I am thrilled to be included in a PSA and to be a part of an initiative that shines a light on talented women in production and opens the doors for even more opportunities for women.”