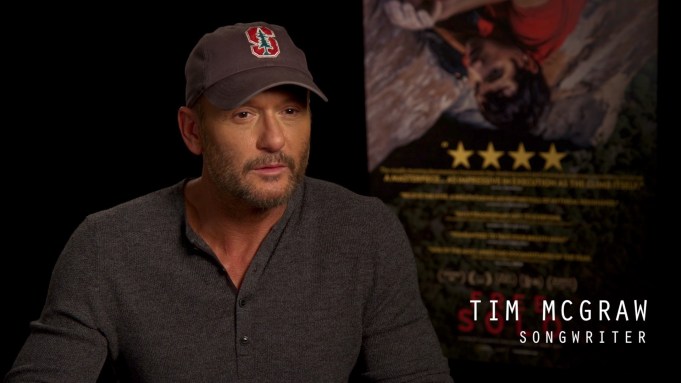 A singer-songwriter from Louisiana who has won three Grammys, 14 Academy of Country Music awards, 11 CMA awards and 10 American Music Awards, Tim McGraw is one of country music’s guiding lights—a multifaceted talent that is making a bid for Oscar this year with his original song, “Gravity.”

This week’s guest of the Production Value video series, McGraw explains that he fell in love with Free Solo right out of the gate, seeing qualities in Honnold that are admirable and rare. “What struck me with Alex was certainly his intent and purpose in what he was doing. I think going after your dreams and accomplishing the things you want to accomplish, and putting yourself in a position to rely on yourself, those are things that a lot of people don’t ever find the strength to do, or the will to do, or the opportunity to do, in some cases,” the songwriter says. “I think Alex did that in spades.”

Setting out to write his original song for the doc, McGraw enjoyed the general framework the film provided—a “nexus of something to write about,” to be inspired by, that has been instrumental in writing some of his best songs. “It gives you a good outline when you have a film to write to, but at the same time, you don’t want to be on point all the time with what you’re writing,” he says. “You have to figure out a way to write something that serves the film, serves the visual, serves the emotion and the theme of the film, but also make that song be universal in a lot of ways.”

For Free Solo, McGraw tapped into the tension and beauty of a story with myriad complexities. The foremost reality was that in pursuing his dream, Honnold was putting himself in a position where any minor mistake could mean instant death. As seen in the film, the climber’s driving passion took its toll over the years not only on his body, but also on his relationships. Sacrifice in the name of the dream presented itself as a clear theme. But generally speaking, McGraw demurs when asked to speak to his process—how he makes that leap from inspiration, through perspiration, to a memorable song. ”I’m not a writer who can sit down and make appointments two or three times a week. I have done that, and there’s been successful songs that have come out of that, but for me, it’s more visceral and instinctive, the way I write,” McGraw reflects. “It’s got to be something that strikes me. It could be a line someone says just in a conversation, or it could be something that I see on TV, or something I read in a book.”

Inspiration is everywhere—embedded in life itself—and while McGraw is humble about his craft, he doesn’t take for granted the effect it’s had on his audience over the years. “The great thing about being a singer and a songwriter, or any kind of artist, is you have a profound power in creating art that moves people, and puts people in a position to be inspired in the choices that they make,” he notes.

In Free Solo, Honnold pursues his mountaintop—the summit where he can be satisfied, at least for a moment, with what he’s accomplished in his life. What, then, would that summit be for McGraw? With more than 50 million records sold worldwide, and a remarkable 43 #1 singles, McGraw is one of the best-selling musical artists of all time. In numerical terms, he is currently on par with the likes of Journey, The Black Eyed Peas, Usher, Christina Aguilera, Tupac Shakur and more. What can one do, at a moment like this, but step back and enjoy the view? At 51 years old, McGraw is currently focused on “finding joy and gratitude as much as you can.”

For more from our conversation with Tim McGraw, take a look above.