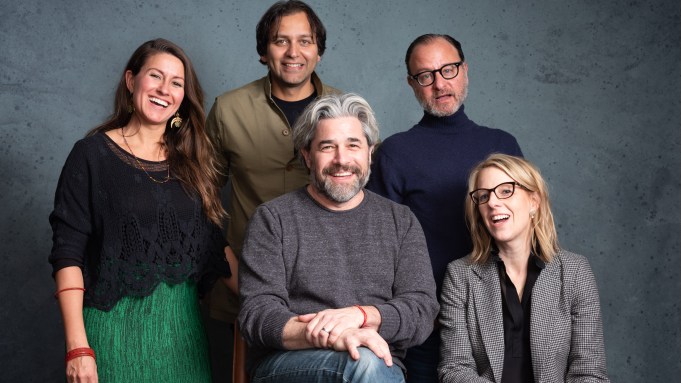 Committed to making movies about saving the planet until he dies, “or until people wake the f*ck up,” Fisher Stevens believes he’s seen positive change of late, in people’s attention to our changing climate. Out on the promotional circuit just a few years ago with Before the Flood, a nature conservancy doc he took on with Leonardo DiCaprio, the producer found it difficult even to secure talk show bookings, “because they were worried about the fossil fuel industry not giving them advertising dollars on their shows.” But now, it seems, people might just be waking up.

Even as a new sense of hope dawns on Stevens, the prolific producer-director-actor is well aware of challenges the environment is facing. Just last fall, the United Nations released a report suggesting the world could be in dire straits by the year 2040—and to Stevens, American politicians in power are doing the world no favors. “I have hope that Trump will be indicted. We have to change the administration in the United States because he’s now the biggest problem facing conservation, and my hope is that this new head of the EPA, Andrew Wheeler, does not get confirmed,” he told Deadline recently at Sundance. “Sorry to get political, but he works for the oil and gas companies, as do most of these people.”

For Stevens—along with producers Xan Parker and Zara Duffy—the way to cultivate a sense of hope is to continue telling the stories of the planet, its creatures, and those striving to protect them, as they did with their latest doc, Tigerland. From Discovery Channel and RadicalMedia, the film takes a look at India’s legacy of tiger conservation, and those who continue carrying that torch today.

Eventually, the producing team found their man in Ross Kauffman, who had never done a film about animals, and was therefore puzzled at being approached with this project. Signing on, the director wanted to explore “the beauty and the majesty” of the animal, rather than its destruction.

The key then became finding the right documentary subjects. One of Kauffman’s major discoveries was Amit Sankhala, a wildlife guru with a remarkable familial background. “My grandfather was a forest officer who started one of the biggest projects to save tigers in the wild, with a lot of good political backing in that era, and my family has since come along and been in everything from wildlife tourism to conservation, to having their own NGO,” Sankhala shared. “But the idea is, I’m not a scientist. I just want to create awareness.”

Education is power, Sankhala says. “The tiger example is, we know every tiger by name. When somebody sees a tiger, they’re told what tiger they’ve seen, and it’s not just a number. It is a tiger, and when something happens to that tiger, the world cries.”

Making Tigerland took Kauffman and his crew to some crazy places. On his filmmaking journey, he’d encounter a freezing Far East Russia, the KGB and more. To hear more from the director and his Tigerland team, take a look above.