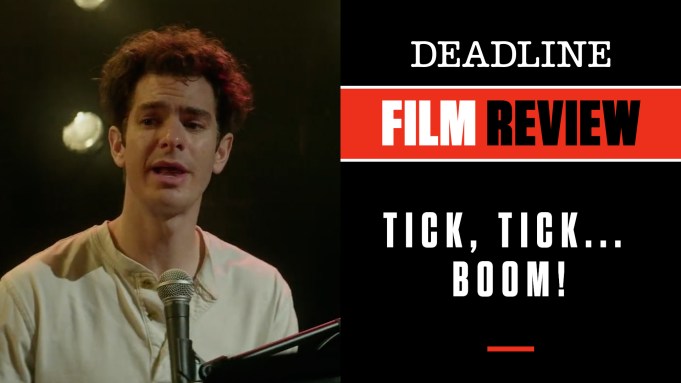 It seems entirely appropriate that Lin-Manuel Miranda would hold off his motion picture directing debut until he had something he clearly could be passionate about. No doubt he has found it in the screen adaptation of Jonathan Larson’s autobiographical 1990 Off-Broadway musical tick, tick…BOOM!

Miranda has a close connection to this, even playing the title role of Jon in a production of the show, and there can be no question that Larson was some sort of spiritual mentor to the emerging musical theater ambitions of a young Miranda. This is the nascent film director’s gift in return.

Larson’s story is now one of legend in the Broadway community, an enormously promising voice for the theater who died from an aneurism at age 35 the night before what would become a massive triumph, Rent, opened and began over a decade-long run on Broadway and theaters around the world. It was turned into a less successful film version, and ironically Miranda’s tick, tick…BOOM! turns out to be the film fans of Larson’s work deserve and have been waiting for.

Much of the credit also has to go to the pitch-perfect casting by Bernard Telsey in concert with Miranda, particularly with Andrew Garfield, who until now has not done any musical work in film. But he acquits himself in a wonderful and engaging way in the role of Jon, a struggling waiter at the Moondance diner who dreams of making it big in musical theater. Of course, that is what he eventually did with what turned out to be groundbreaking ideas that would deeply influence the Miranda’s of the world and change Broadway forever. This movie is about that kind of movie happy ending, just the bones of what was to come.

There actually is something eerie about this show. Coming just a few years before he would create Rent, this idea came directly from Larson’s own experience of trying to mount an elaborate sci-fi futuristic workshop musical called Superbia. That show went nowhere, but in following the advice of his veteran agent (Judith Light) to “write what you know,” Larson began to find his own voice in the form of initially a one-man show, a rock monologue as it were, that became tick, tick…BOOM!

The prevailing theme finds him, played brilliantly by Garfield, freaking out to be hitting age 30 with no notable success to show for it. He points to his idol Stephen Sondheim, who had his first big hit at age 27, and he feels like a failure, especially since his roommate and former actor friend Michael (a terrific Robin de Jesus) has moved out of show business and into a successful ad career and dream penthouse apartment. His girlfriend Susan (a splendid Alexandra Shipp) also is about to move on from the life they had, frustrated in particular that she feels he is only invested in her as fodder for his next creative ideas.

What the show, and certainly the expanded take Miranda and screenwriter Steven Levenson (Dear Evan Hansen) bring to it, is really all about is the creative process of an emerging talent and the shared passion for theater it represents. It is about finding your own voice and making a life that matters personally and professionally. It certainly is prescient in retrospect that perhaps Larson knew he was running out of time when he created this show (later expanded for future productions to three characters and a somewhat bigger canvas). That Netflix will be sending this around the globe on November 19 (after opening in select theatres this Friday and premiering at AFI Fest) is the kind of pipe dream of which Larson could only have dreamed. Like those great Italian Renaissance painters he never lived to see his ultimate success, but in death he has become a true inspiration seemingly continually being rediscovered by audiences. Thanks to Miranda’s heat since his own wild triumphs In the Heights and Hamilton, he can call his own shots, and the one shot he chose is to honor the man who inspired him. He has done that wonderfully here.

The music is better than your average Broadway score, and some of it just soars as when Vanessa Hudgens, playing a member of the ensemble of the play within the play, belts out “Come yo Your Senses,” or what a, uh, magical chorus sings in the soaring “Sunday” at the Moondance diner, a musical number you will not soon forget. No spoilers here, though. I also loved the few scenes where Bradley Whitford turns up as Sondheim, the genius who saw the potential in Larsen and tries to encourage him even when his dreams seemed kaput.

Cinematically speaking, Miranda is comfortable behind the camera finding ways to bring what was thoroughly a theatrical piece to life as a movie. For theatre geeks, fans of Larsen and Miranda and Garfield and musicals – on stage or in the movies- tick, tick… BOOM! explodes in all the right ways on screen. This year is proving to be a boon for the resurgence of movie musicals, and here is one near the top of the pack.

Producers of the Imagine production are Imagine’s  Brian Grazer and Ron Howard. Julie Oh also produces. Additionally Julie Larson, Jonathan’s sister, keeps it all in the family as an executive producer here. Check out my video review with scenes from the film at the link above.

Do you plan to see tick, tick…BOOM!? Let us know what you think.