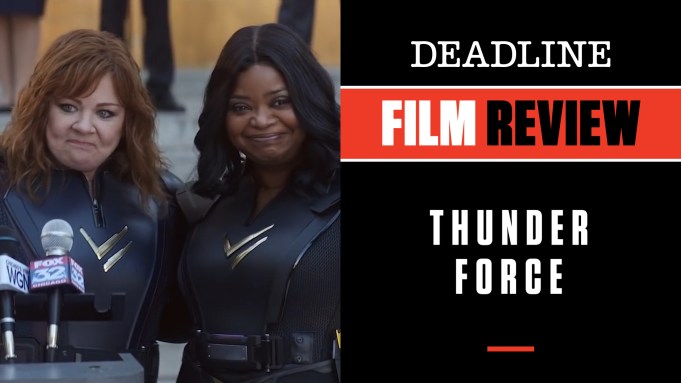 Everything in Thunder Force, writer-director Ben Falcone’s latest collaboration with wife Melissa McCarthy, seems overly familiar — certainly in its comic spin on the well-worn comic book genre. Coming on the heels of another sci-fi comedy, Superintelligence, in which McCarthy battled supernatural alien forces out to destroy humanity, this frenetic entry also heads straight for streaming, this time on Netflix.

For the undemanding fans of its talented, Oscar-winning and -nominated stars, there is some amusement watching McCarthy and Spencer in action as the “Thunder Force,” especially getting in and out of their Thundermobile, but much of the attempt at laughs is just too forced to land this vehicle in the top tier of the best this star can do. After Superintelligence, Tammy, Life of the Party and The Boss — all directed by Falcone for his wife — this is another hit-and-miss effort, not quite hitting as much as it misses.

It starts out promisingly, detailing the BFF relationship between student Lydia (McCarthy) and brainy Emily Stanton (Spencer) before they have a falling out and go their separate ways. After the opening credits, decades have passed, they are all grown up, and Lydia works as a heavy-machinery operator while Emily heads Stanton industries and has become a major player. Her goal, however, is to avenge the death of her parents, who were working on a formula to combat the miscreants, a group of baddies struck by some sort of explosive material in 1983 that gave them superhuman strength. They use it for no good in Chicago, and among the victims were Emily’s mom and dad.

She is on the verge of perfecting a device that will give her the same kind of superpowers in order to fight the miscreants, who are visibly wreaking havoc in the form of Laser (Pom Klementieff), who is in cahoots with the crooked Mayor “The King” (Bobby Cannavale) and others including “The Crab” (Jason Bateman stealing every scene he is in). However, on the night of their high school reunion, Lydia decides to reunite with Emily, dropping by unannounced to her massive headquarters to take her to the bar where their classmates are gathered. While left alone for a few minutes, she experiments with some of the top-secret gadgets in Emily’s suite of offices and, before you know it, has set off the mechanisms designed to give Emily those superpowers.

Instead the one-shot invention is delivered to Lydia, much to everyone’s disgust. Although they’re complete opposites in manner and education, Emily now must team with Lydia in order to fight the miscreants, all the while devising a different superpower that makes her invisible when needed. Thus, Thunder Force is born and set out to save the city and humanity from the antics of the bad guys.

Falcone clearly is a comic book nerd, so he adds a lot of elements that will be familiar to fans, but only Bateman’s hilarious “The Crab” — a man who became a victim of an underwater accident that somehow turned his arms into crab legs — is the best reason to sit through 90 minutes of this silliness. His droll comic readings and interplay with McCarthy, who takes a romantic interest in him, show off both stars’ smart instincts in drilling for laughs in an absurd situation (although a fantasy musical number seems superfluous).

No one is trying to win Oscars here, folks.

Spencer is playing straight but clearly loving the opportunity to team with McCarthy in this kind of thing. Another Oscar winner, Melissa Leo, is an associate of Emily’s who figures into the plot later on, as does Taylor Mosby as Emily’s grown daughter. Cannavale seems to relishing the opportunity to go all evil.

Marc Platt, Adam Siegel, Falcone and McCarthy are producers. Netflix starts streaming it today. Check out my video review with scenes from the film at the link above.

Do you plan to see Thunder Force? Let us know what you think.