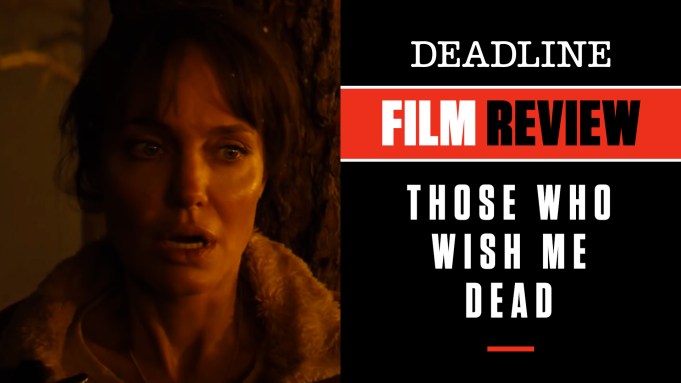 It has been more than a decade since Angelina Jolie last took on a singular action role (in Salt), but with the movie adaptation of Michael Koryta’s novel Those Who Wish Me Dead from Yellowstone creator Taylor Sheridan, she has found a vehicle that lets her show her stunt ability (she did most of them) as well as acting prowess. You can see why she was attracted to the idea of playing a smoke-jumper who, though still fighting fires, is irreparably harmed by memories of a tragic incident years earlier she still thinks she could have prevented. That comes up in flashbacks occasionally as she finds herself in a new perilous situation when she stumbled upon a young boy, frightened and running from danger in the wilderness. It is their slow bonding, and the need to escape a couple of murderous henchmen on their tail, that makes up the heart of this traditional but involving thriller.

Director and co-writer Sheridan has an impressive résumé as a helmer of movies like Wind River and hit TV shows like Yellowstone — projects also set in wide-open locales. His screenplays also include such acclaimed films as Hell Or High Water and Sicario, so he has proven he can take perilous situations and turn them into gripping, character-driven stories. Although the bad guys in this one are fairly stock, and what they are so intensely pursuing is somewhat murky, Sheridan makes this all pop nicely off the screen with some nice story detours including a massive fire that pits Jolie’s Hannah and Finn Little’s Connor against not only human nature, but also mother nature, and the combination can be nail-biting at times.

Connor’s father Owen (Jake Weber) is driving with his son when he hears a district attorney’s home has been blown to smithereens. He immediately senses he is next as he knows why some very bad men did that, and that with information he possesses imagines he will be next unless he gets out of town with his son. Turns out he was right and drives right into a trap set by vicious killers Jack (Aidan Gillen) and Patrick (Nicholas Hoult, in a real change of pace). Connor, freaked out and scared but carrying a piece of paper his father told him to get to the authorities in case something happened, manages to elude them and sets out on a trek that eventually leads to meeting Hannah. Slowly they build a relationship as she realizes something really bad is going on and they both could be killed. Heading back to her isolated watchtower, she wins Connor’s trust, but lightning strikes, and then eventually an out-of-control fire (intentionally started by Jack to create a diversion) complicates matters.

Add to the mix a police officer (Jon Bernthal) who is related to Owen and Connor and comes upon the crime scene, as well as his wife Allision (Medina Senghore) who is six months pregnant but about to physically engage with the two bad-news dudes looking for her husband and information on Connor’s whereabouts. All these characters add up to a pretty exciting third act as their paths converge. Don’t ask me though what Tyler Perry is doing in this movie in a one-scene cameo as the mysterious boss of Jack and Patrick. Whatever the earth-shattering nature is of the mysterious information they are after, the real core of this film is far more concerned with the pursuit and the effect on all these people caught up in it. It’s quite a ride.

Shot on location in New Mexico doubling for Montana, the cinematography by Ben Richardson is breathtaking, and the action is hot. Producers are Steven Zaillian, Garrett Basch, Aaron L. Gilbert, Kevin Turen and Sheridan. Warner Bros releases the New Line Cinema and Bron production Friday in theaters as well as on HBO Max.

Check out my video review above with scenes from the movie. Do you plan to see Those Who Wish Me Dead? Let us know what you think.