Continue to Deadline SKIP AD
You will be redirected back to your article in seconds
Skip to main content
April 2, 2021 11:39am 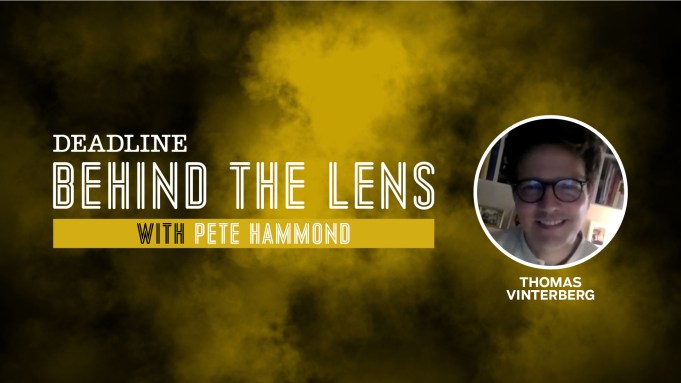 Thomas Vinterberg achieved that rare honor with this year’s Oscar nominations, not only receiving one for Denmark’s Best International Film entry, Another Round, but also one for him as Best Director category — the only nominee there for a film not also competing for Best Picture. This is something true icons including Ingmar Bergman, Federico Fellini, Lina Wertmuller and Ang Lee, and more recently the likes of Michael Haneke and last year’s winner Bong Joon Ho, achieved. You can tell how excited this Danish director was when he heard the news read during the nomination announcement, and you can see that footage in my conversation with Vinterberg for this week’s edition of my Deadline video series Behind the Lens.

The filmmaker says he was very surprised, and moved, to receive a directing nomination from his peers in the Academy and notes that it comes for what he calls perhaps the “most Danish movie I have ever done.” Yet this story of four high school teachers who make a pact to experiment on the positive aspects of drinking also struck a universal chord, offering something celebratory during a year when a pandemic has taken over our lives. Vinterberg talks about how the idea started out to be more provocative on emphasizing the positive aspects of drinking but turned into something more, well, sober, in taking this starting point to tell a story about life.

Four days into shooting the film Vinterberg got tragic news that his daughter, who encouraged him to make this film, had been killed in a car accident. It was devastating, as he says, and still is for him and his family, but he knew he had to go on and make this in her memory, even at her school.

Mads Mikkelsen is one of the four stars, all good friends of the director, for whom he actually wrote this and he explains as we start the interview what it was like getting them all to agree to do it, and to play drunk for much of it — a process that required a boot camp of sorts in getting it just right. Vinterberg is one of the founders of the Dogme style of filmmaking in 1995, and his much-acclaimed movies from his native Denmark include The Celebration, The Commune and The Hunt, the latter a previous collaboration with Mikkelsen that brought the star the Best Actor prize at Cannes.

Vinterberg also talks about making films around the globe and his English-language movies such as Far From the Madding Crowd with Carey Mulligan. He no doubt will be seeing her at this year’s Oscar ceremony, which he tells me he will get to in any “legal” way possible. To watch our conversation and to go Behind the Lens with Vinterberg, just click on the link above.