Continue to Deadline SKIP AD
You will be redirected back to your article in seconds
Skip to main content
May 2, 2018 10:53am 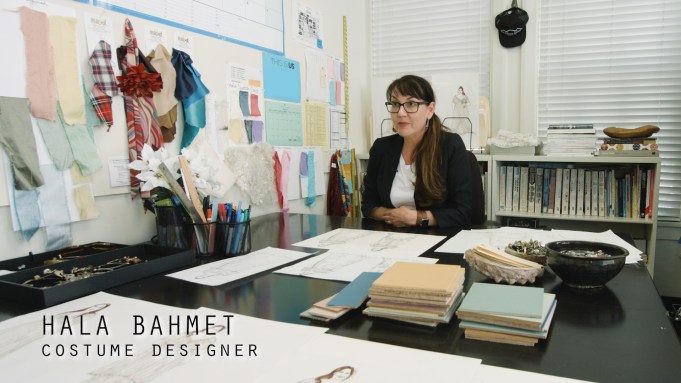 Hala Bahmet, whose work on Ryan Murphy’s American Crime Story earned her an Emmy nomination, takes Deadline behind the scenes of NBC’s hit drama This Is Us in the third installment of the Production Value video series.

Sitting down in her office on the Paramount lot, Bahmet explained what has driven her in her career as a costume designer, as well as discussing her latest gig on NBC’s hit drama.

“I think what I like most about being a costume designer is that it’s always something different, that we’re always creating something new,” she said. “Every eight days we get a new script, and we have no idea what’s going to be in it, and then we get to jump in and build that, whatever that is.”

When it came to This Is Us, the qualities that were attractive to Bahmet were the aspects that made the project so challenging—the audacity of its constant jumps back and forth through time. Handling a series with multiple iterations of one character, seen at different ages, she has found it important to pursue an “authenticity of character,” where each one has “an aesthetic that’s built inside of them.”

“The important thing also is, as we jump around, I want the viewer to always know where we are,” she added. “Having a consistency and specific aesthetic for each character helps the audience also follow the characters and get to know them better.”

Bahmet also touched on one of the more prominent costumes designed for the series’ second season: Kate’s wedding dress.

“We start to work out the preliminary design in the sketching process. Specifically for Kate’s wedding dress, the next step is to make the dress in a less expensive fabric—a mock-up fabric—try it on the actor, and work out further kinks and design ideas there,” she explained. “Then, once we really have our design nailed down and everybody’s happy, we go ahead and cut the expensive fabric, which in this case was a very beautiful beaded French lace.”