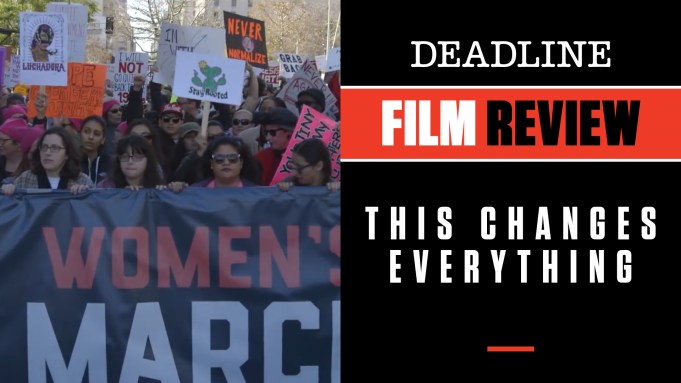 At one point in the powerful and fascinating new documentary This Changes Everything, executive producer and Oscar-winning actress Geena Davis explains the film’s title. She notes how every strong and hugely successful female oriented project, such as her own Thelma & Louise and the Penny Marshall-directed A League of Their Own, were predicted to be game-changers for women in Hollywood but ultimately never led to true change and opening doors. It was always back to business as usual in the male-dominated industry. This compelling docu aims to bring a clear focus on the problems women encounter in gaining equality with their male colleagues.

Davis founded the Geena Davis Institute on Gender in Media after watching kids programming on TV and being shocked at how little representation girls had on these shows and cartoons. She took action and immediately found that the best way to combat the problem is to uncover the data that proves her point. This movie uses a lot of those numbers in telling the story of how under-represented women still are in Hollywood – both in front of and behind the scenes. In addition to Davis — who will receive the Jean Hersholt Humanitarian Award from the Academy on October 27 for her work in this field — a who’s-who of star power is interviewed including Meryl Streep, Natalie Portman, Taraji P. Henson, Reese Witherspoon, Cate Blanchett, Sharon Stone and so many others including many top directors and producers who bemoan the fact that, though some progress is being made, it still has a long way to go.

Key sequences involving legal fights by the ACLU and DGA on this issue are eye-openers, but the film gets into some very personal and poignant stories that also are effective. One in particular comes from Chloe Grace Moretz, who tells a story about making a movie when she was just 14 and being asked to wear a breast-enhancing device. She says it really affected her self-esteem and for the first time made her realize she wasn’t an “actor” but rather an actress, with all the negatives that that can mean in a Hollywood that still hasn’t found the key to equality.

An interesting aspect of all this is the fact that This Changes Everything was directed by a man, Tom Donahue. Some might believe that this movie especially, considering the subject matter, should be helmed by a woman. Donahue, however, is the one who got it made and feels correctly that it is as much if not more important to open the eyes of men in this regard. The film does this by really zeroing in on something most men probably never have thought about, even self-regarded “feminists” like Alan Alda who is also among the interviewees here, along with others like UTA agency head Jeremy Zimmer and FX Networks head John Landgraf, who talks about how his company changed its ways once the inequities were pointed out to him.

The film already was in the works and in progress when major events happened including the election of Donald Trump and the emergence of the #MeToo movement. Both are addressed in the movie as things that only just continued to raise the stakes — not only in Hollywood but for women everywhere.

This is a highly important movie but also an entertaining one as it incorporates lots of film clips and history along the way. Producers are Ilan Arboleda and Kerrianne Flynn. It premiered to great acclaim and reaction at last year’s Toronto International Film Festival and will roll out in theaters beginning Monday with a special Fathom Events engagement that day in more than 1,000 theaters across the country. Check out my video review at the link above, which also includes footage from the movie.

Do you plan to see This Changes Everything? Let us know what you think.