Continue to Deadline SKIP AD
You will be redirected back to your article in seconds
Skip to main content
June 5, 2020 2:06pm 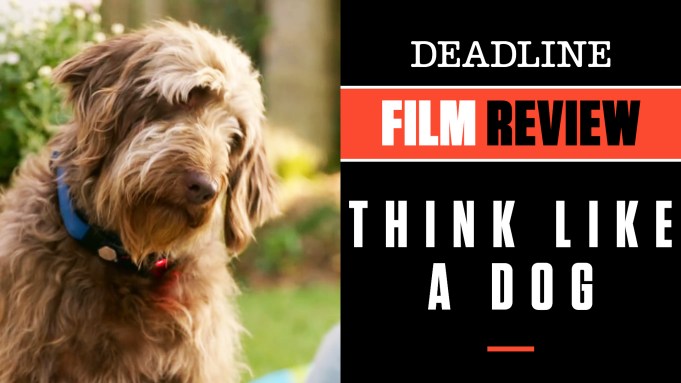 Lionsgate is holding a virtual world premiere tonight ahead of Tuesday’s VOD and digital release of its talking-dog kids flick, Think Like a Dog. For parents struggling to keep children entertained at home with something other than countless repeat viewings of Trolls World Tour or Scoob! this harmless, sitcom-y trifle can’t come soon enough.

To help relieve the price of renting it over and over, the studio also is making the Blu-ray and DVD editions available on the same day. Kids are likely to eat this one up and beg for more because the dog at the center of the action, Henry, is about as lovable and loyal as they come and he crushes the gig, far outdistancing the human stars in sheer star wattage. That said, lead kid Gabriel Bateman (The Dangerous Book for Boys, Annabelle), who plays Oliver, is blissfully devoid of cloying mannerisms of many child actors, and that makes his unique relationship with this canine watchable fun for families. Perhaps Bateman’s work in 2018’s Benji reboot gave him a (hind) leg up in working with man’s best friend.

Premieres? Red Carpets? Oscar &amp; Emmy Campaigning? – “Nothing Will Go On Like Normal”

Actually, as far as talking-dog movies go, this one has a clever premise. Oliver’s a bit of a whiz kid, and his school science experiment — which involves cyber partnership with another kid named Xiao (Minghao Hou) across the globe in China — is so complex that it actually results in an unintended discovery. Turns out that when Oliver places a certain type of collar device on Henry, he has instant telekinetic communication and can hear all of the dog’s thoughts and speech, and vice-versa.

This leads to predictable comic high jinks but also to big trouble, when Silicon Valley kingpin Mills (Kunal Nayyar) gets wind of Oliver’s accidental invention and tries to steal the formula, which he believes could be a money-minting sensation. This puts not only Oliver but also Henry on his most wanted list. Meanwhile, thanks to a tip from the pooch, Oliver learns that his parents (Josh Duhamel, Megan Fox) are heading for a divorce — a development they hadn’t yet share with their son, who understandably is upset and begins plotting with Henry on how to keep them together.

Lest you fear this is going to send the picture careening into a warmed-over Parent Trap, fear not. It is just a minor subplot to the real action at hand, which eventually sees Henry rounding up his other neighborhood four-legged friends to help save the day and rescue Oliver just in time to take his dream date Sophie (Madison Horcher) to the big school dance. Oh yes, we see in a few scenes where Oliver is rehearsing playing Romeo for drama class that he keeps unintentionally switching out Juliet’s name for, that’s right, Sophie, who is sitting in the audience.

Shout-out to Todd Stashwick’s nuanced voice-over work as Henry, a scene stealer given that he gets whatever good lines are to be had in writer-director Gil Junger’s film, which is yet another example (pre-COVID) of cooperation between the Chinese and Hollywood film industries. This was shot on both continents (in Beijing and New Orleans) with a mixed bag of participants from both countries including producers Andrew Lazar, Cory Chen, and Linshu Zhang. Lionsgate unleashes it on June 9. Check out my video review with scenes from the film by clicking the link above.

Do you plan to see Think Like a Dog? Let us know what you think.