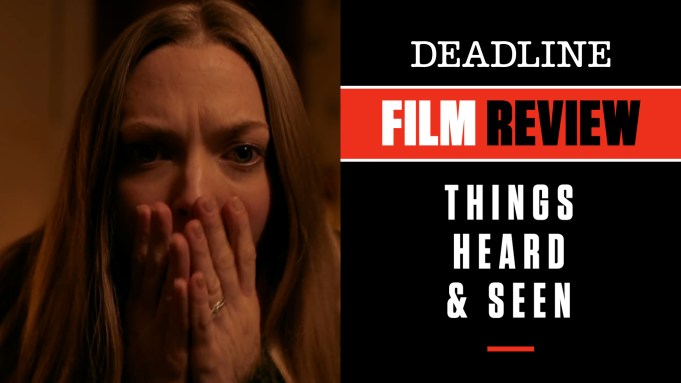 In a weird way, Netflix’s new thriller of the week, Things Heard & Seen wants to be a genre supernatural haunted-house story, a drama of a marriage in crisis and a psycho thriller all in one. It is like Ingmar Bergman’s Scenes from a Marriage meets The Conjuring meets Sleeping with the Enemy.

Fortunately, writer-directors Robert Pulcini and Shari Springer Berman (American Splendor, The Nanny Diaries) are sharp enough filmmakers to use the ghostly goings-on mostly as an anchor for a tale of a marriage disintegrating before our eyes. Before it heads off the rails in the third act, Things Heard & Seen rates as a grounded and solid movie centered on the question: Do we really know the person we are living with? Then it gets a little gonzo. But I have to say I couldn’t take my eyes off it, so there’s that.

George Clair (James Norton) and wife Catherine (Amanda Seyfried) are living, presumably happily, in a busy Manhattan apartment. Catherine has a job she loves, but when George is accepted to teach at a small liberal arts college in upstate New York he convinces his wife they must make the move. With a young child named Franny (Ana Sophia Heger) to consider, Catherine caves and off they go, moving into a farm house George got for a great price.

There is just one problem: The house has some dark secrets, and so does George.

Catherine slowly realizes she’s witnessing ghostly supernatural weirdness going on. Things go bump in the night, and so does their relationship as she grows slowly suspicious that her husband is holding back some key truths.

She befriends a couple of local boys, Eddy (Alex Neustadter) and younger brother Cole (Jack Gore), bringing them on as handymen as she tries to fix up the centuries-old house. And soon through research she discovers damning evidence about the past residents. Turns out Eddy and Cole are orphans due to a catastrophic happening in the house, and spirits are reaching out to Catherine to warn her of impending trouble ahead.

You can cut the tension she feels toward oblivious hubby George with a knife as, bit-by-bit, a darker picture of her beloved emerges as she uncovers select secrets and lies. We are privy to his own moral dubiousness when, on an outing with Franny at the library, he picks up on a young woman named Willis (Stanger Things’ Natalia Dyer) and after some initial seductive flirting embarks on a torrid affair.

Things get intense as George continues to lead his double life, playing the dutiful husband, working in a new teaching job he has fudged his resume to get, and living in a new rural neighborhood that is challenging his wife and their union by the hour.

Based on the best seller All Things Cease to Appear by Elizabeth Brundage, this 1980-set story works best when it just about the mounting problems of trying to keep a marriage alive. Pulcini and Berman know exactly how to build small tensions that are set to explode. They merge those conflicts into a genre house-of-horrors scenario that works surprisingly well as long as it stays on track.

Seyfried is ideally cast as the miserable and suspicious spouse thrust into a world where she is increasingly uncomfortable and frightened. British actor Norton (Little Women) succeeds in walking a tricky tightrope as a husband and father trying to keep up appearances and questions about his honestly at bay. As a marriage story the film works just fine until it defies credibility. Then you start finding it hard to believe why Catherine puts up with this guy.

The filmmakers are blessed with a fine supporting cast as well including Oscar-winner F. Murray Abraham as the college department head Floyd De Beers who befriends and supports George, but also becomes a true believer in the spiritual goings-on that are haunting Catherine, which he discovers one night when he drops by the house.

Turns out De Beers is a Swedenbourian, a disciple of the writings and paintings of Swedish expert on heaven, hell and ghosts Emanuel Swedenbourg, whose presence is felt throughout the film, including a picture, “The Valley of The Shadow Of Death” given prominent placement in the film. Swedenbourg is also key during a séance scene in which past residents of the creepy house are summoned.

Better Call Saul’s Rhea Seehorn is excellent as a new colleague of George’s at his college, but one whose own simmering doubts about his behavior make her a threat. Such recognizable actors as Karen Allen and Michael O’Keefe also make effective, if brief, appearances.

Producers are Anthony Bregman, Stefanie Azpiazu, Peter Cron and Julie Cohen. Netflix starts streaming it tomorrow. Check out my video review with scenes from the film at the link above.

Do you plan to see Things Heard & Seen? Let us know what you think.