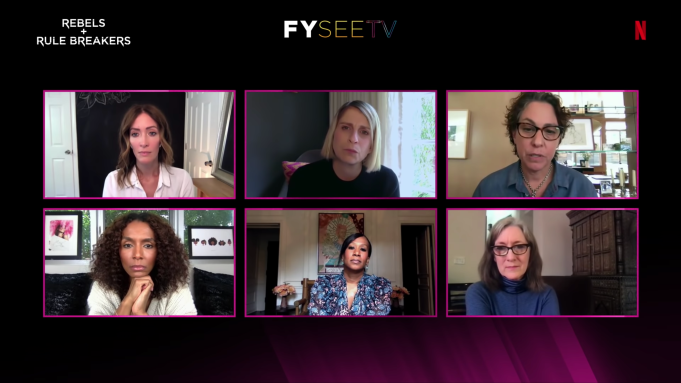 When Nicole Avant, producer of documentary film The Black Godfather, set out to make a film centered around her father, music industry legend Clarence Avant, her intention was to highlight the need for opportunity for all, and the importance of coming together as a country to make that happen.

Speaking during speaking during Netflix’s FYSEE panel discussion with Deadline, Rebels and Rulebreakers: Shot Callers, Avant said, “As much as it is about my father and he is the backdrop and he’s the drive of the film, I really set out to make a film that celebrates all of the people, men and women and children who sacrificed and suffered, and were traumatized, but on behalf of the greater good. And they didn’t give up. I mean we’re all actually sitting on this panel because of brave people like I showed in the film.”

The documentary features numerous well-known people who knew and worked with Clarence Avant, including Quincy Jones, Bill Withers, Andre Harrell, Sid Sheinberg, Joe Smith and Oscar Cohen. But Nicole Avant said, while she was honored to be able to include those people in the film, the documentary was intended to recognize everyone who made sacrifices for equality and opportunity.

“I’m talking about the men who were carrying around the sign [saying] ‘I am a man’. All the people that were getting hosed down and beaten up by the police… I wanted to tell a great American dream story, that usually is told through one lens… We are better than this, we are much stronger than this. And America’s great when America works together, and American’s great with our energy and passion of “yes”, and also our energy and passion of, “No that’s not right, that’s not fair, that’s not good, and we’re going to shift it.”

Lisa Cholodenko, the Oscar and Golden Globe nominated and Emmy winning director, was also on the panel to discuss Netflix limited series Unbelievable. Starring Kaitlyn Dever, it follows the true story of a teenager Marie Adler, who is accused of lying about being raped. Cholodenko directed the first three episodes, setting the tone for the show.

“My work has tended to have some irony and humor in it,” she said, “and this was certainly not a funny story, so it just took me a beat to find an angle that went beyond the theme, the subject matter. I didn’t want to do a polemic or strident show about rape, I think we all know that. I wanted to come at it from a different point of view that I felt might be more, for lack of a better word, relatable.”

Cholodenko also lit upon another particularly painful part of Adler’s story for her focus—Adler’s betrayal by her supposed support system. “I was always really taken in the origin story by the piece of it about the foster moms who went forward and talked to the detectives on the case who were investigating it, and who betrayed Marie, and that was just devastating to me.”

For Janet Mock, who wrote, directed and executive produced the Emmy-nominated show Pose, choosing projects that challenge the industry’s status quo has been a hallmark of her career thus far. The Netflix limited series Hollywood, on which Mock wrote and directed, is set in the Golden Age of Hollywood, and tells what might have happened if inclusivity had been broached back then.

“For me, as a lover of the 1940s, the gilded age of Hollywood, and the studio system and how they made stars, [I was] really wishing and hoping that there were more opportunities for, say, a Lena Horne, or a Dorothy Dandridge, to be able to be the center of a picture. I think with that concept in mind, and collaborating with Ryan Murphy and Ian Brennan who created the series, that was my in into it, and so we have these characters who are young dreamers who are wanting to see themselves on the screen…and how they fight the system, the older guard to say Support us, support our stories, allow us in, allow us the reins to tell a new kind of Hollywood story.”

The show seems especially pertinent in this political moment. “In that sense,” Mock added, “I think our goal was to offer some commentary on where we are now and why we’re here.”

When executive producer Lisa Henson set out to make a prequel series inspired by her father Jim Henson’s much-loved 1982 film The Dark Crystal, she followed in his footsteps in breaking existing rules of fantasy film. Using puppetry in this type of epic fantasy story was a major challenge her father had surmounted, and one that she would also rise to in making the series The Dark Crystal: Age of Resistance.

“He was so proud of the film when he made it,” she said, “and then when we finished the series I felt it was the thing I was most proud of in my career… It is, in its own way, a really big sprawling epic fantasy, and yet we really did try to bring in themes.”

Henson didn’t take on the mantle of her father’s legacy though without first experiencing life outside, and other work. When she came to the family company, she was 40 and had her own family. She considers that outside perspective to be invaluable. “I was looking at what our family company was doing from the inside and the outside at the same time,” she said. “And I continue to try to keep that perspective because I don’t want to be a hot house Henson flower that never worked outside of our little weird culture. I also was in the human world and in the non-puppet world, so I try to blend those two perspectives all the time.”

Another panelist who rebelled against existing ‘rules’ of television is Emmy winner Liz Feldman, creator and showrunner of Dead to Me, which stars Christina Applegate and Linda Cardellini as Jen and Judy—two friends united by secrets, lies and murder. Now in its second season, Jen and Judy’s relationship goes from strength to strength, entirely avoiding the typical tired tropes of female friendship, like jealousy or competitiveness.

“It was deliberate, my approach towards presenting female friendship the way I myself have been lucky to experience it,” she said. Oftentimes, when I’m watching specifically female friendships on tv I get frustrated and disappointed when it falls into the traps [of] cattiness, competition and jealousy.”

Key to her handling of the characters’ relationships is to draw on her own personal attitude. “As cheesy as it is,” she said, “I like to lead from my heart, I lead from a place of love and that is how I approach my friendships. I just wanted to see that on screen…. I knew that I wanted these two women to be that for each other, to be this unconditional love and support, and mirror, in that they really see each other, that they accept each other for who they are. It’s sort of a love letter to my own friends that have shown me that kind of love and acceptance.”