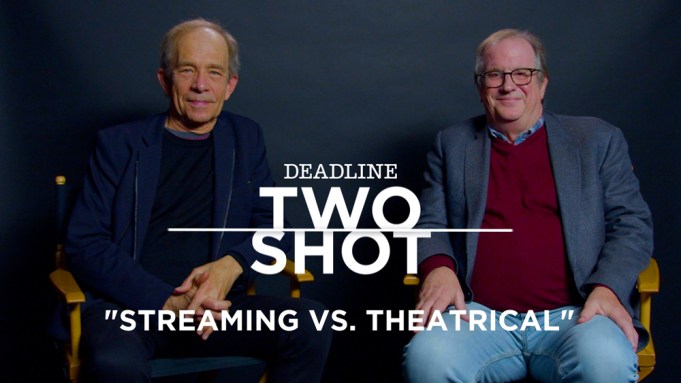 Editors note: Deadline presents the third episode of Two Shot, a video series in which Pete Hammond and Todd McCarthy tackle the artistry of films. Each has reviewed and written about the craft for decades and built a remarkable breadth of knowledge of films past and present. What we hoped for when we asked them to do this was a concise, mature, thoughtful conversation comparable to what we saw when Roger Ebert and Gene Siskel were alive.

This week, Hammond and McCarthy get into a heavy topic these days in terms of the way we have viewed movies in the past, present and inevitably the future. It is a hot conversation being had in the industry weighing the pros and cons of traditional theatrical exhibition vs the ever-changing business of streaming new movies, sometimes skipping theaters altogether even for films with very big stars who are being lured with wads of cash from the world of streamers.

What will prevail? Is exhibition dead, or will Marvel and Spider-Man save it? How do we feel about movies we see on a large theater screen versus our TV sets (or worse, on a laptop or phone), and most importantly how does that affect our reviews of the films and our experience in watching them?