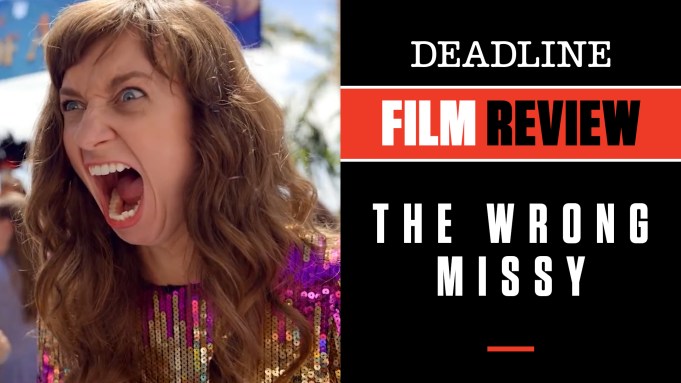 Adam Sandler’s Happy Madison keeps churning out product for Netflix like there is no tomorrow (and some days, the way the world is going right now, there may not be). With its latest, a new comedy called The Wrong Missy, it has taken a somewhat familiar premise to wring some genuine laughs and nice Hawaiian locations to make us forget we are in the middle of a pandemic.

I can’t say I am a huge fan of much of the Sandler output on Netflix — hit and miss at best — but this one grabbed my sweet spot and it comes at the perfect time. Maybe part of the reason is it was shot at the new Four Seasons Resort on Oahu, and I had just been there a few months before their shoot, so it was fun feeling like I was right back there. And though this clearly isn’t aimed at critics, it actually is far more amusing for the most part than a lot of theatrical movies of this ilk these days, with much of the thanks for that due to star David Spade playing the beleaguered straight man for a change, and the very funny leading lady Lauren Lapkus going for the broad laughs. The balance is perfect and the pair play off each other with ease. In fact, Spade’s subtle deadpan reactions of sheer terror are a nice change of pace for the comic.

Spade plays Tim, a longtime employee of a credit firm who has broken up with his fiancée and now is back on the dating scene. A blind date at the restaurant with Melissa aka Missy (Lapkus) is a disaster as she turns out to be a total unhinged whack job; he escapes through the men’s room window. Cut to three months later and he accidentally switches suitcases at the airport, leading to a meet-cute scene with another Melissa aka Missy (Molly Sims, charming in a few brief scenes).  This leads to a texting, even sexting, relationship (he thinks) that results in an invitation for her to join him for his company retreat in Hawaii. As the plane is about to take off, however, it is the wacko Missy who turns up, making Tim realize he has been texting the wrong one all along.

Now stuck with her in Hawaii in full sight of his co-workers and new boss Mr. Winstone (Geoff Pierson), he cringes as she really goes off the rails doing everything from offering disastrous psychic readings to jumping off a cliff yet somehow surviving to continue genuinely embarrassing “her boyfriend” at every turn. Some of it has all the credibility of a Road Runner cartoon, and there is incident after incident, but Lapkus, though sailing over the top in many scenes, also manages to calm down enough to make us have a little empathy toward her, especially when she discovers this was all a mistake on Tim’s part. It’s a strong comic turn.

Among the cast is Jackie Sandler (Adam’s wife), very good as the office rival to Tim; Nick Swardson as Tim’s friend and head of HR; and of course as in any Sandler enterprise there is Rob Schneider, this time as a shark tour guide who lost his fingers to one of the Great Whites he leads this group to check out. Hell, even Vanilla Ice shows up towards the end. No stone is unturned in order to get laughs, but I have to admit I was providing them out loud watching this on my couch. I am well aware this isn’t Oscar material, or even a smart comedy, but gross and low brow as some of it is, it brought a smile to my face. I had a good time, so sue me. Go ahead, sue me.

Tyler Spindel directed and kept the pace just right. The script is by Chris Pappas and Kevin Barnett. Producers are Allen Covert, Kevin Grady, Judit Maull and Adam Sandler. It is now streaming on Netflix.

Check out my video review above with scenes from the film.