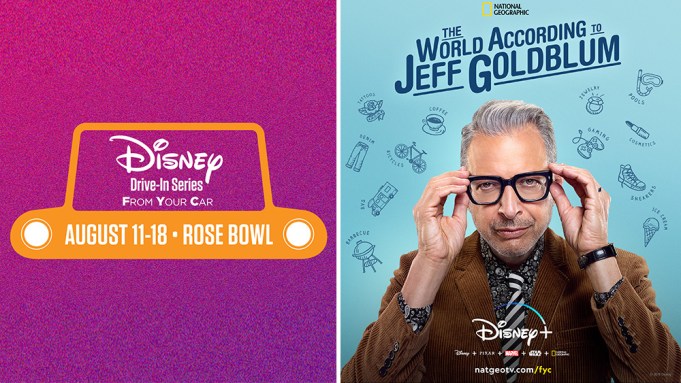 It was National Geographic’s turn at the Disney Drive-In Series this week as it presented boatloads of cars packed into Pasadena’s iconic Rose Bowl parking lot-turned-drive-in theater an opportunity to experience the Disney+ series The World According to Jeff Goldblum. Emmy nominated this year for Outstanding Hosted Non Fiction Series or Special, the first-season series has taken Goldblum to many points around the country to do a deep dive into everyday topics that interest him including the origins of tattoos, ice cream, bikes, coffee, RV’s, cosmetics, jewelry, sneakers, denim, BBQ, gaming and so on.

The industry audience at the Disney Drive -In was treated to a look at the “Tattoo” and “Ice Cream” episodes, preceded by a conversation between me and Goldblum (he was beamed in from London, where he is shooting Jurassic World: Dominion) in which he explained the attraction of doing a series like this, which by the way has been renewed for a second season.

“I said I think I’d like to do something spontaneous and I said, I think this could be very exciting for me. I’d like to get out and about and not do anything conventional, read anything, I think I’d like to think and talk at the same time and you can kind of separate the wheat from the chaff,” he said about his initial conversations with NatGeo execs. “And that’s kind of what we followed and then we honed it down to subject matter that had to do with objects that everybody loves, possibly, that allows us to be connected to each other like some of these things.”

“It’s about things that bring people together, especially in this time that we’re living through. You know, it was interesting to talk about all these things almost as if we were in the play, it reminds me of Our Town. That if you become a ghost and were able to come back and say you know, I didn’t appreciate enough, these things that I love, that are part of my everyday world, and I didn’t know the last time I’d have an ice cream cone, really, but if I could only go back and see it again,” he added. “It’s kind of like what we’re experiencing, at least I am, nowadays, going jeez, just to hug somebody or be in and connected in amongst a group of people and connected to them and share things that we adore you know, is kind of, has added meaning to me now.”

Having young kids (now ages 3 and 5) later in life also influenced Goldblum’s decision to venture out into this kind of informational series, and do something of value that would have meaning for his them too.

“We have Charlie and River who appear as a matter of fact, I hope not too obnoxiously, in some of the episodes. We did an episode on bikes and Charlie was just learning to ride a bike at the time and I got a bike, and barbecues, but this confluence of having kids for the first time has intersected with this show about my interest in life and our world and curiosity and it has resulted in a particular cycle of inflaming of my person in terms of wanting to learn things and see how curious they are and how open and you know, they are to life. It’s just informing and transforming everything I do,” Goldblum said.