As Packaging Comes To An End Today, Squabbles Over Grandfathered Projects Likely To Continue; Analysis + WGA Q&A
Read the full story
May 13, 2021 4:22pm 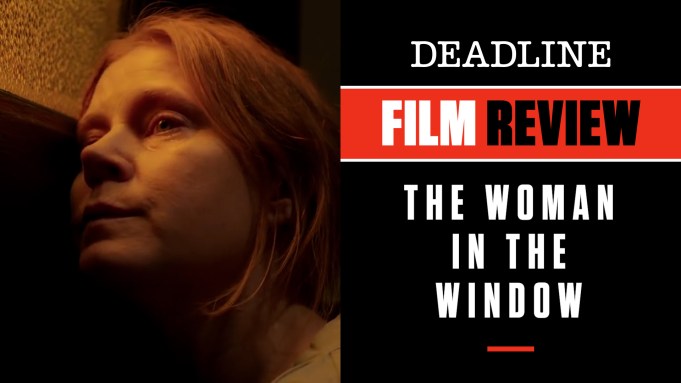 When you consider the impressive names associated with the new Netflix drama The Woman in the Window, you might wonder what possibly could be so wrong with this thing that it has been delayed so long that it looked like it would never get released.

Amy Adams stars with a cast that includes Julianne Moore, Gary Oldman and Jennifer Jason Leigh, for starters. A-list director Joe Wright (Pride & Prejudice, Atonement) is behind the camera; Tracy Letts, a Pulitzer Prize-winning playwright (August: Osage County), wrote the screenplay adaptation of A.J. Finn’s best-selling novel; and Oscar winner Scott Rudin (before this well-publicized recent troubles) was among the producers. An exceptional group of veteran artists worked below the line. What could go wrong? Just about everything.

The film originally was made by 20th Century Fox before the Disney merger, and once Disney inherited it, they kept moving it, pre-pandemic, around the schedule but never actually opened it. The studio unloaded the pic to Netflix in August, and the streamer finally is going to premiere it on the service beginning Friday with minimal promotion, as far as I can tell.

The cast alone will probably draw a curious audience, but what they will see is a bit of a confused mess, a Hitchcock pretender that goes nowhere. And Hitchcock is an apt comparison since this psychological thriller seems very much inspired by one of Sir Alfred’s all-time greatest films, 1954’s Rear Window, which starred James Stewart as a wheelchair-bound man constantly looking out at his neighbors in surrounding apartments when he finds himself caught up in a mystery. Throw in other inspirations like The Girl on a Train and elements of Wait Until Dark, and you get the idea.

Adams plays Anna Fox, a severely agoraphobic ex-child psychologist who never leaves her NYC brownstone but passes the days drinking red wine and watching old black-and-white film noir movies on television. She is particularly intrigued by the outside world from her window and becomes fixated, with camera in hand, on a new family moving into an apartment across the street. Lo and behold, she gets a visitor — the couple’s 15-year-old son Ethan Russell (Fred Hechinger), bearing a gift from his mother. At first nervous to unlock her door, she warms up to him and lets him in. They strike up an instant friendship. On another day, Jane Russell (Julianne Moore), the woman Anna believes is Ethan’s mom, visits to offer support and a little cleanup duty after trick-or-treaters have terrorized Anna and egged her house. They have a nice chat over wine, of course, and Anna continues checking on the Russell activities even after that, prompting an angry Alistair Russell (Gary Oldman) to barge in and demand she stop “spying” on his family. But when she witnesses a blood-soaked murder one day, she calls the cops and all hell breaks loose.

Anna is convinced that Alistair has killed Jane, who Anna believes has mysteriously disappeared. She brings in Detective Little (Brian Tyree Henry) to investigate, but the woman claiming to be Jane suddenly appears to prove Anna wrong. Jane Russell No. 2 is played by Leigh. Oy. Does this get convoluted? Is Anna going crazy? Is she hallucinating? Did she witness a murder or what? Why doesn’t Julianne Moore have a bigger part? Other characters are in the mix here including her basement tenant David (Wyatt Russell), who helps out as a handyman but turns out to have been in prison for some reason at one time. There is also Letts, who plays Anna’s therapist, a thankless role he wrote for himself.

‘The Woman In The Window’ Trailer: Amy Adams Vs. Outside World And Inside Her Head In Netflix Drama

All of this drags on, lightened up only by occasional cute shots of Anna’s cat, as her condition worsens and the (self-imposed?) terror ratchets up to the point where one of these characters unveils a knife, timed perfectly to an intense rainstorm and flashbacks revealing Anna’s reasons for her mental instability (this is where Anthony Mackie briefly shows up). Adams is such a good actress that she makes us believe that she really believes in the plight of her character. Moore — in for basically one big scene — Oldman, a way-underused Leigh and Russell can’t do much with stock characters. Hechinger has a bigger role and does what he can with it. Quite frankly, this whole thing would have been better off staying on the shelf.

Check out my video review with scenes from the movie at the link above. Do you plan to see The Woman in the Window? Let us know what you think.