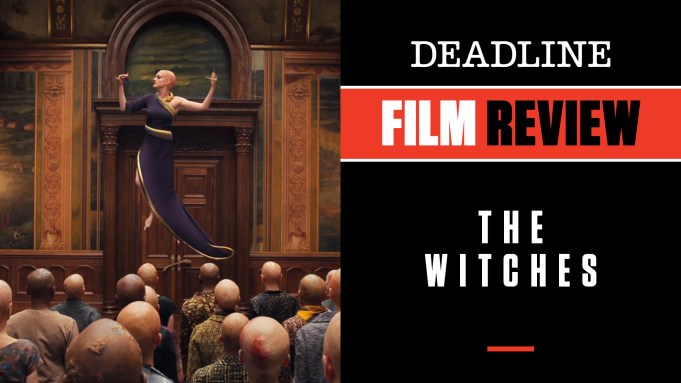 You gotta give Anne Hathaway credit. She leaves no stone unturned in diving into her dark and evil side as the Grand High Witch who dominates director Robert Zemeckis’ The Witches, the vividly intense new film version of Roald Dahl’s classic children’s tale. It was previously made by Nicholas Roeg in 1990 in a version that featured Anjelica Huston in a slyly amusing turn as the very same witch that now, in Hathaway’s long hands, sails over the top in pure evil shenanigans. With a generous assist from the CGI special effects wizards, Hathaway is a much more tech-assisted creation than what Roeg and Huston achieved 30 years ago. Plus, the setting has been switched from Dahl’s England to 1960s Alabama.

This is where an 8-year-old boy (Jahzir Bruno in a sweet performance) has been orphaned and sent to live with his doting and loving grandmother (a lovely Octavia Spencer), who teaches him the nice things of life until an unfortunate encounter one day in the grocery store with a scary snake-wielding witch (Josette Simon) freaks him out to the point that Grandma decides they have to flee town for a while. It seems she is a bit of an expert, based on personal experience, on all things witches — including potions, spells and general behavior.

She decides to play it safe and take the kid to the Grand Orleans Imperial Island Hotel, a safe haven run by a prissy manager (played by Stanley Tucci). Not so safe as it turns out since there is also a convention starting for the International Society for the Prevention of Cruelty to Children, a cover for the coven of witches who are determined to rid the world of children and set this meeting to further their cause. Hathaway runs their show, and the big set piece takes place in a hotel banquet room as the witches bewig themselves revealing gross bald pates as the Grand High One details plans to hand out poison candy that will immediately turn the little tykes into mice. She even demonstrates on a plump British kid named Bruno (Codie-Lei Eastick), who instantly becomes a rodent.

Watching all this is our Hero Boy hiding out in the vent with faithful companion mouse Daisy (voiced by Kristin Chenoweth), who as it turns out was also a human-turned-pet. Hathaway’s histrionics lead also to Jahzir’s character being turned into a mouse once he is caught, though he does manage to escape with the other two in his sorry situation. Spencer comes to the rescue in an ongoing effort to reverse the bad spell and get them all back to human form. It ain’t that easy. Besides this sequence (which might terrify younger kids, by the way), there is another great scene set in the hotel restaurant as the witches gather for a meal of garlic soup, while Grandma and the mice sit nearby watching the whole joint slip into chaos. Loved that.

Although Zemeckis is prone here to play all this on a very high decibel, and might have occasionally asked his bewitching star — sporting an exaggerated Scandinavian, or is that Russian, accent — to tone it down a bit, this adaptation captures much of the book’s menace, and in the second half in particular manages to make stars out of those mice. It is helped enormously by the grounded and reassuring performance by Spencer, and some nice voice narration by Chris Rock as the grown-up version of our key protagonist.

Guillermo del Toro was initially attached to direct this as animated version but retains a writing credit along with Zemeckis and Kenya Barris. The production values overall are top notch. Producers are del Toro, Zemeckis, Jack Rapke, Steve Starkey and Alfonso Cuarón. Originally intended for theatrical release by Warner Bros, the pandemic changed those plans and instead new streamer HBO Max will debut it Thursday just in time for Halloween.

Check out my video review above with scenes from the film. Do you plan to see The Witches? Let us know what you think.