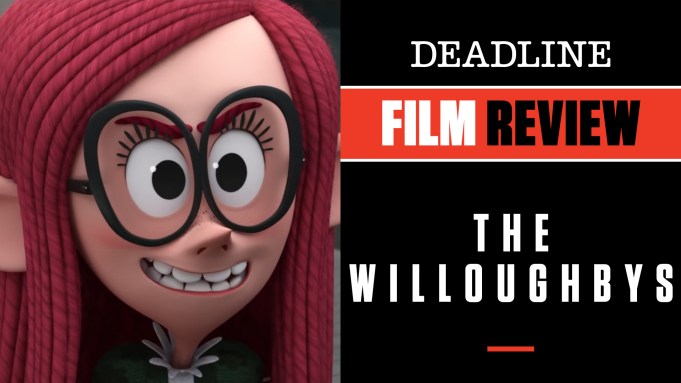 With just about anything he does, Ricky Gervais makes me laugh, and that is a key reason I warmed right away to the loony high jinks of the latest attempt by Netflix to crash the animation market.  As the chatty tabby who guides us as narrator of The Willoughbys, a film version of the children’s book by Lois Lowry that tells the story of four miserable siblings cleverly scheming ways to turn themselves into orphans, Gervais has attitude (maybe not quite as much as displayed on the Golden Globes) to spare and the best lines in a voice cast that is top notch.

Right from the start, Gervais’ kitty warns us away from the movie, you are expecting a story about a loving family and a happily-ever-after ending. That is not what Lowry necessarily had in mind, and it certainly is not what director Kris Pearn (Cloudy with a Chance of Meatballs 2) and co-writer Mark Stanleigh are doing by ratcheting up the book’s tale by several decibels. This is nonstop zany animation and also very dark mischief, even if visually Technicolored-bright. Of course, dark themes are not alien to entertainment aimed at kids. From Dickens to Disney to Dahl, and most recently franchises like Despicable Me and Laika films like Coraline, there always has been a sense of foreboding in many tales aimed at the youngest among us.

What sets The Willoughbys apart is the look, which is not exactly gothic or brooding as in many kid projects. This one is sparkling bright despite a plot that is pretty frightening on the surface. The parents (voiced by Martin Short and Jane Krakowski) clearly are only concerned about themselves, treating their brood horribly, including the mush that passes as food and other sordid details that don’t qualify them as Mom and Dad of the Year.

The siblings are led by oldest Tim (Will Forte), smart and savvy Jane (Alessia Cara) and twins who both are named Barnaby (Sean Cullen) since the parents couldn’t even be bothered to come up with separate identities for them. Things are so dreary that Jane is in charge of finding ways to do away with their folks, coming up with a plan to send them off on vacation in an adventure to some far-flung remote locale they hope will end with their demise. The idea was triggered for her from the sudden appearance of a baby in a box (they name her Ruth), which also serves as another story angle in this wacky stew that is so frenetic it will exhaust you by the end of 90 minutes but at least gives attention-deficit audience members no excuse to nod off.

Once the parents are gone, the kids think they are footloose and fancy free until a knock at the door brings Linda, the cut-rate nanny hired to babysit them. She’s a whirlwind that the kids now must also figure out how to get rid of. As voiced delightfully by Maya Rudolph, she is a life force to be reckoned with, so beware children. Lots of antics lead to the big crisis in the final act where the kids have to face the consequences of what they have done and must try to come to the rescue before they really are orphans.

Netflix continues to make its mark in animation, coming off two Best Animated Feature Oscar nominations this year for its Cannes pickup I Lost My Body and the holiday hit Klaus. And this one from Bron Animation keeps the trains running in a stylish and amusing way, even if it never slows down to take a breath. Being released at a time when families are cooped up together 24/7 and probably plotting similar mutinies, this might be just the right tonic to bring your whole clan together.

Brenda Gilbert and Luke Carroll are producers. Netflix begins streaming it Friday. Check out my video review with scenes from the film at the link above.

Do you plan to see The Willoughbys? Let us know what you think.