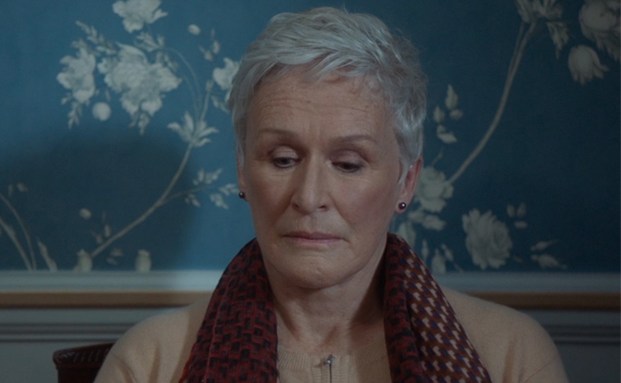 Glenn Close has won multiple Tonys, Emmys and numerous other awards in her storied career. She also is, perplexingly, a frequent Oscar bridesmaid, having been nominated six times but still without a win. That finally and deservedly could change this year with The Wife, in which she delivers what might be her greatest big-screen performance. The film is equally as good as its star, a movie that is as timely and compelling as they come.

And what timing, indeed. I first saw it at last September’s Toronto International Film Festival, where it was up for sale (Sony Pictures Classics picked it up), and that was just weeks before the #TimesUp and #MeToo movements would explode onto the scene. As I say in my video review (click the link above to watch), this story of a woman, long in the shadow of a powerful man, who stands up for herself and her self-worth simply is extraordinary — not only as entertainment but as a think piece that comes just at the right moment.

The simple fact, though, is this has been in development for over a decade as filmmakers have tried to bring Meg Wolitzer’s novel to the screen. With the help of a superb and biting script from Jane Anderson and fine direction from Swedish helmer Bjorn Runge, the dream finally has been realized and the wait was well worth it. Close plays Joan Castleman, now in a 40-year marriage with husband Joe (Jonathan Pryce), a literary lion who has just been informed that he won the Nobel Prize for Literature. This, of course, is a joyous moment for both as they make plans to travel to Oslo for the ceremony. However, it is not as idyllic as it looks as the film drifts in and out of flashbacks to tell the story of their complex relationship which began when Joe, then married and a young father, takes up with bright student Joan. This breaks up his marriage as he begins a new life with her.

We see their collaboration in other areas as well when suddenly his writing, until then rather mediocre, takes on new fire and life and his legend grows. Secrets, lies, infidelity, love, compromise and deceit all collide as the years go on, they build a family, and he builds a legacy of which Joan seems fiercely protective. Into the picture comes Nathaniel Bone (Christian Slater), a writer who is eager to get Joe to cooperate for the book he plans to write about the great author, something both Joe and Joan resist. Bone is like a snake slithering behind the scenes as he seems to know more than anyone wants to reveal about this couple. To say more would be to spoil the dramatic arc and joys of seeing this smart and involving movie proceed at its own pace.

Close builds her performance to a crescendo that is a master class in screen acting. Pryce matches her every step of the way as their marriage is dissected and shown in all its aspects. Slater is also terrific here in a sly turn that is lots of fun to watch. Close’s real-life daughter Annie Starke very effectively plays Joan in the flashback scenes, as does Harry Lloyd as the young Joe. Max Irons does well as the long-suffering son who tries to carve out his own writing career but is caught up in the reputation of his father. The acting could not be better in a movie you likely won’t stop thinking about, nor should you. Producers are Claudia Bluemhuber, Rosalie Swedlin, Peter Gustafsson, and Piers Tempest. Sony Pictures Classics begins rolling it out on Friday.

Do you plan to see ‘The Wife’? Let us know what you think.