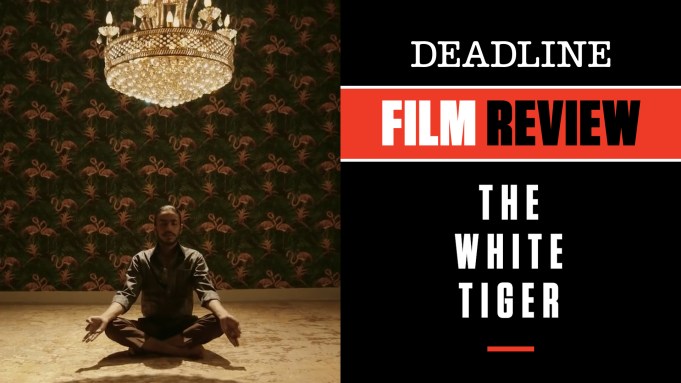 Ramin Bahrani’s filmography is one strongly driven by stories about people struggling to stay above water, maybe characters you pass on the street but never think much about. From his early films including Man Push Cart and Chop Chop to larger-canvas productions like At Any Price and the stunning 99 Homes, social issues and just mere survival in an uncaring society are at the forefront. And that continues with perhaps his most ambitious work yet, The White Tiger.

This one has been percolating in his head for a long time as it was adapted from a Booker Prize-winning novel by his friend and former classmate Aravind Adiga. He even saw many drafts of it before it was published in 2008, and his name is on the dedication page. So it seems fated that if a film version were to be made, Bahrani would be the one to do it.

The sprawling epic, with first-person voice-over narration from its protagonist Balram (Adarsh Gourav), is set in India, particularly where this poor villager who grew up with every expectation he would spend his life in servitude. It is just the way it is. He manages to escape working in gross surroundings in dirty kitchens when he lands a job as chauffeur to new masters from a wealthy family, Ashok (Rajkummar Rao), and his American wife, Pinky (Priyanka Chopra-Jonas, who is also a producer), just back from the States. The work gives Balram exposure to a different world, with swanky hotel surroundings far from what he knew — though he still is meant to sleep in the parking garage. The first half of the film often is quite funny and lighter, sharply satiric too, but the tone changes fairly dramatically in the second half when a betrayal leads to Balram turning the tables, becoming a pot-bellied master himself and sinking to the most devious of schemes to climb the ladder.

We have seen success stories coming out of poor villages in India before, most recently in Dev Patel movies like Slumdog Millionaire or even Lion, but those are loaded with the kind of heart Bahrani steers clear of in a movie that cuts much more sharply to the bone. It works because the director deftly manages to keep the tonal shift on track and credible, sets it in 2007-10 at a time of key change, and also owes much to the performance of largely unknown Gourav, who I promise you will not be unknown after this film hits the global reach of Netflix on Friday (as long as viewers surfing the menu don’t confuse it with the streamer’s notorious Tiger King).

Bahrani weaves the story from the outside in, using authentic locations and local actors who hit the perfect notes for this darkish commentary on India’s caste system. By letting Balram tell his own story in exceptionally well-written narration, the film actually feels — intentionally — closer in style to Scorsese’s Goodfellas than any modern Bollywood production. The influence clearly is there, but it really works to keep us engaged in Balram’s unique journey all the way. The production values are first-rate, particularly Italian cinematographer Paolo Carnera’s camera work, the offbeat musical choices and expert editing for a film with about 200 scenes. It has a flavor all its own, and Bahrani seems to have a personal investment in doing Adiga’s creation justice on the big screen. He does it. Check out my video review with scenes from the film at the link above.

Do you plan to see The White Tiger? Let us know what you think.