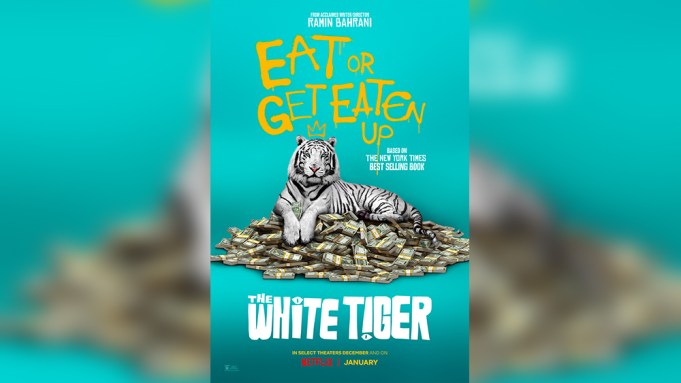 EXCLUSIVE: Here is the first trailer for the Ramin Bahrani-directed adaptation of The White Tiger, an adaptation of the Aravind Adiga novel that won the Man Booker Prize in 2008. Netflix will release the film theatrically in December and make an awards push as it releases globally in January.

His early efforts Man Push Cart and Chop Shop and later films like 99 Homes have leaned in on class conflict and the haves and have nots, and that theme plays strong in India and its caste system traditions that still linger despite reforms and an economic trajectory. The novel focused on a master and servant class the latter has little hope of rising above. It seems destiny that Bahrani was the one to adapt and direct this novel, since the author dedicated it to him 12 years ago. Pic stars newcomer Adarsh Gourav as a bright youth who learns to play the system to rise as high as a servant class member can, Bollywood star Rajkummar Rao plays the pampered son of a wealthy businessman whom the youth drives and waits on, and Priyanka Chopra Jonas plays the son’s wife, who grew up in America and has little regard for class tradition and subservience.

“Aravind and I went to college together at Columbia University and for 20 years he has been one of my closest friends,” Bahrani told Deadline. “When I made my first film, Man Push Cart, he was a journalist and it gave him the push to go back to India and get his first novel done. He sent me rough drafts of The White Tiger and I thought, he is such a great writer of characters and such a great thinker. He is dealing with heavy issues, but he made it so funny and entertaining, the character recounting his story in first person narration in a letter to this Chinese premier on his way to India to learn what it means to be an entrepreneur. It totally destabilizes the white Western world; Aravind so smartly predicted where things were headed.”

Though a huge global seller for a first novel with 4 million sales and perhaps twice that many in counterfeit copies read by the servant class that Bahrani saw on streets in India while shooting the movie, right next to perennially counterfeited titles like Joy of Sex and Harry Potter, the book was controversial and it took years for the author to suggest to Bahrani that the time was right. They convinced India-based producer and rights holder Mukul Deora, and then Netflix. “I waited 15 years to make this movie,” Bahrani said.

Supporters included exec producers Ava DuVernay and Chopra Jonas, the latter of whom lent her star power. “Priyanka contacted me after reading Aravind’s book and advocated to be part of it,” Bahrani said. “She loved its strong social themes and had been helping a lot of female filmmakers there trying to tell stories about something. And she had to act in the movie and was willing to do an audition for me and she nailed it. You’re going to see a performance from her that nobody in the western world has seen from her. In over in India she’s a great actor, but here, what she has done is a revelation.”

Bahrani said he shot with an India crew in New Delhi, Bangalore, Dhanbad and Agra, but when he showed part of the film to his parents, his father who grew up in Iran told them it was like watching his own childhood with no running water and plumbing, and if you had to get around it was by donkey. While India’s backdrops are unique, Bahrani said the have and have-not theme is as relevant in America or most anywhere else in the world.

“It’s pretty startling when you see the film, which is about castes and class inequality, and say, wow, this feels a lot like America or anywhere else in the world right now,” Bahrani said. “Aravind found the perfect central metaphor, the rooster coop that the servant class won’t venture beyond, and this bright young man who feels trapped and doesn’t have the opportunity for an education, doesn’t have health care or anything, but is willing to do anything to break free and achieve something. Seeing the journey of someone who feels that trapped and will do anything to break free is something we can relate to maybe now more than ever in the tragic age of COVID.”