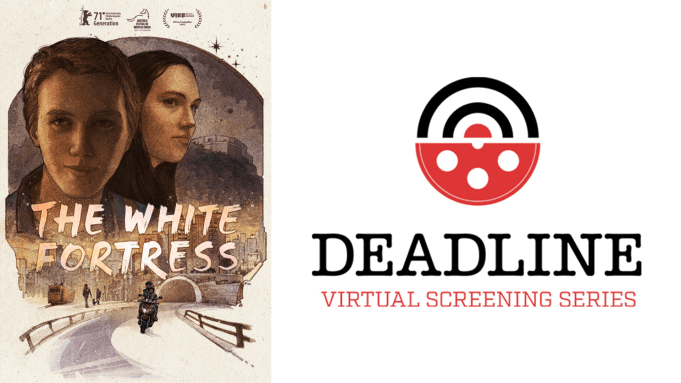 Director/writer Igor Drljaca’s The White Fortress premiered at the Berlin Film Festival earlier this year and is Bosnia and Herzegovina’s official submission to the International Feature Oscar race.

In the film, two teens from very different backgrounds meet in post-war Sarajevo. Faruk (Pavle Cemerikic) lives with his ailing grandmother and forages for scrap metal while also dabbling in crime to get by, yet against his better conscience. Mona (Sumeja Dardagan) is from an affluent and influential family and dreams of escaping her toxic home life. The pair almost shouldn’t have met, but go on a journey that is both heartbreaking and hopeful.

Drljaca, who left Sarajevo at age nine and lived for a year with his family as refugees in Europe, ultimately settled in Canada in 1993. He addressed the plight of young people in contemporary Bosnia, and his intentions with the film, when he joined us to discuss The White Fortress after Deadline’s virtual screening of the film (see video above).

Calling the current situation in Bosnia for young people “quite dire,” Drljaca said he wanted the love story of The White Fortress “to have this darkness that’s sort of part of the Bosnian landscape right now. But at the same time, even if their love doesn’t necessarily survive in a physical way, it’s there to sort of inform a better, more hopeful, tomorrow.”

Explained Drljaca, “There was a very strong middle class, for example, in former Yugoslavia, that’s been sort of eroded and (Faruk) used to belong to a sort of upper or upper middle class upbringing — his mother was a concert pianist — and then slowly there’s this drift away where the new generation’s dreams are put to the test because their families’ circumstances changed; and the inverse relationship with Mona’s case where there is this new avant garde, the new powerful elite and they kind of dictate how things are done.”

The filmmaker wanted to give his characters “an agency over their fate,” rather than being “pushed down a path.” He added, “What a lot of times happens is that younger people don’t have agency so they just kind of go with the programming and they succumb to these forces. This kind of quiet resistance that both of them muster is a way that I approached my upbringing, even in Canada. There was everything from language barriers, culture shock — it was initially a very kind of particular experience, but at least I found a way to kind of find meaning and an anchor. The disappointment in Bosnia is that despite the peace treaty and all the stuff that’s happened to rebuild the country in a physical sense, young people are mostly unemployed… like 100,000 people leave the country each year. The birth rate can’t nearly keep up with the number of people that are fleeing. So it becomes very overlooked; the international community doesn’t pay attention too much until there is a threat of violence, and in some ways they benefit from it because you have people being educated in good internationally run schools, and then they just leave the country and they become lawyers and doctors and engineers in other countries… But the main fault for that is the actual system, it’s not necessarily the young people that are leaving. It’s that they are not given opportunities in that system. That is the subtext of the film in many ways.”