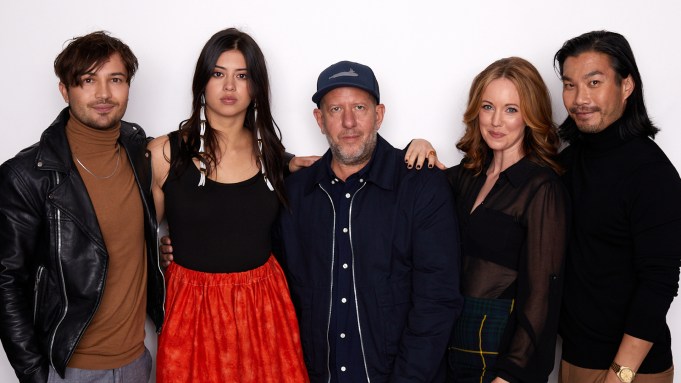 In a departure from his previous comedic films, Steve Pink says The Wheel “is an intimate drama, or a portrait, about a relationship in crisis.”

The film follows Walker (Taylor Gray) and Albee (Amber Midthunder), a young couple on the verge of divorce, as they travel to an Airbnb in the mountains to get away and work on their relationship.

“I remember being really impressed by the honesty and intimacy that was inside the words on the pages and the relationships between the people” says Midthunder.

“It was such a complex and complicated relationship, as they are in life,” says Gray. “I think so often in films we see a very binary look at it, like a happy relationship, or sad relationship, romantic or not romantic… and this has a little bit of all of it.”

The Airbnb owner Carly (Bethany Anne Lind) tries to help the young couple, but ends up discovering that not everything is perfect in her own relationship with her fiancé Ben (Nelson Lee).

“I think that’s the interesting thing,” says Lee, “the mirror that’s being held up to us, by trying to help them, is actually the thing that might ultimately ruin us.”

“The ideas of two couples in two different stages of life and two different phases of their relationship and just the intricacies,” says Lind. “Steve did so much with bringing out the nuances in a person’s head, when they’re like ‘Should I stay or should I go?’”

Click on the video above to watch Pink, Midthunder, Gray, Lind, and Lee discuss the film.